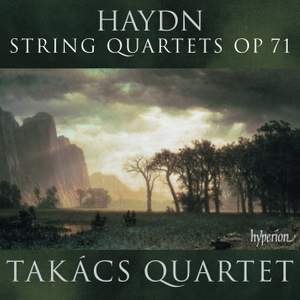 Just occasionally one wonders whether the distinctive timbre and vibrato of Takacs leader Edward Dusinberre sounds too far apart from the other three players for ideal blend. But structure and... — BBC Music Magazine, December 2011, More…

Recording of the Week,  Haydn from the Takács Quartet

For their fifth and sixth albums on Hyperion, the award-winning quartet tackle Haydn’s Opp. 71 and 74, recorded at Wyastone Estate Concert Hall in Monmouth, South Wales last November and showcasing their rich, rounded sounded and clarity of texture to great effect.

These quartets date from 1793 and were written when Haydn returned home to Vienna after a visit to London which had cemented his international fame as a composer and public figure.

The composer wrote a set of six string quartets for Count Anton Apponyi, a chamberlain at the Imperial Court. The set was broken up into two groups of three and sold to separate publishers, thus becoming the Op 71 and Op 74 Quartets, both released this month by the acclaimed Takács Quartet.

The quartets possess an orchestral sonority, and the frequent modulations, dynamic variations and increasingly virtuosic writing can be derived from elements of the six London Symphonies. They demonstrate the composer’s astonishing elegance, lyricism and his immense skill in fusing the profound with the light-hearted.

In these compelling interpretations the Takács Quartet display an absolute unanimity of tone and style and cement their reputation as one of today’s greatest string quartets.

Just occasionally one wonders whether the distinctive timbre and vibrato of Takacs leader Edward Dusinberre sounds too far apart from the other three players for ideal blend. But structure and integrity of feeling are heard here in abundance.

the sound captured here is rich and rounded, but with no shortage of clarity and detail. These details are what makes the difference in the faster and wittier movements, with bravura passagework for all instruments tossed off with real style and panache...passages where Edward Dusinberre’s first violin floats effortlessly above the lower trio are simply magical.

the Takacs play this ever-surprising music with their characteristic imagination, contrapuntal rigour, sensitivity to texture and colour, and, in the dizzying finales, wit. They are the epitome of Goethe’s four intelligent conversationalists, always fresh in their response to Haydn’s astonishing inventiveness.

the musicians’ clarity of line and perfect balance [are] well reflected in Hyperion’s recording. Try the bright light chatter of the Op 71/1 finale, bows bouncing nimbly over the strings; or the playful, trill-laced kaleidoscope of Op 71/3’s first movement...After these magnificent CDs, if the Takács wanted to record Haydn’s other 62 quartets, I wouldn’t raise a hand to stop them.