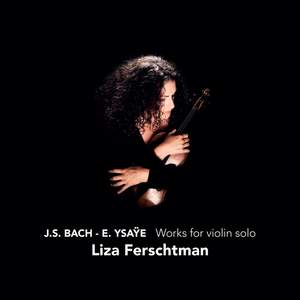 The young violinist Lisa Ferschtman has already received a great deal of critical praise for her first two CDs. The second of these featuring the music of Beethoven and Schubert, released in 2007, was particularly well received. On this new hybrid SACD, she performs some of the great masterpieces for solo violin. The disc includes a sonata and partita by J S Bach and two sonatas by the Spanish virtuoso violinist and composer Ysaÿe which were inspired by Bach’s earlier pieces.

Although still in her twenties, violinist Liza Ferschtman is already recognized as one of the most significant artists of her generation. Her performances are known for their passionate and at the same time intellectual qualities. Her two CDs to date, the first of music by Debussy, Poulenc and Tchaikovsky, and the second works from Beethoven and Schubert, were both very well received by the international music press. In November 2006 Liza Ferschtman received the Dutch Music Award, the highest distinction awarded to musicians in the Netherlands.

J S Bach emerged as the pre-eminent composer of the first half of the 18th century and left an enormous musical legacy, including his masterful sonatas and partitas for solo violin. At the beginning of the 20th century, the Spanish composer and virtuoso violinist Eugene Ysaÿe took these pieces as an inspiration for his own Sonatas for Violin solo. As an example of this, like Bach’s, the first sonata is in the key of G minor and divided into four movements, alternating between slow and fast.