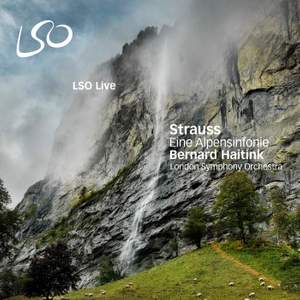 There are so many good recordings of the Alpine Symphony on the market now, but this has moments that are as fine as any, and arguably the noblest overall shape of all. — BBC Music Magazine, April 2010, 5 out of 5 stars More…

Bernard Haitink and the London Symphony Orchestra celebrate the awe-inspiring force of nature and Strauss’s ability to depict that in his writing.

LSO Live is thrilled to welcome Bernard Haitink back for his first recording with the LSO since his internationally acclaimed Beethoven cycle in 2006. Eine Alpensinfonie was recorded in June 2008 during Haitink’s Strauss/Mozart series with the LSO. In his Alpine Symphony Strauss recounts an attempt to conquer the summit of an Alpine mountain. He infuses the score with numerous instrumental colours and rich combinations of sounds, evoking the images and events that take place on the trek. It was to be one of his final large-scale orchestral works and shows the last great German Romantic composer at the pinnacle of his art. Haitink has also recorded Mahler’s Das Lied von der Erde with the LSO and soloists Christianne Stotijn and Anthony Dean Griffey for release on LSO Live later in 2010. He will conduct the Royal Concergebouw Orchestra in Amsterdam during early-2010 followed in June 2010 by a complete Beethoven symphony cycle in concert with Chicago Symphony Orchestra. LSO Live’s other recent releases include Prokofiev’s complete score for the ballet Romeo & Juliette conducted by Valery Gergiev. In March the label releases Gergiev’s recording of Mahler’s Fourth Symphony.

“an outstanding performance of Richard Strauss’s Alpine Symphony. Rarely has the long haul to the summit seemed more purposeful. Haitink’s perfect control of the orchestral palette at sunrise and at dusk, as strands of colour rose out of and sank back into the dark monochrome contours, made this performance an incarnation of the music’s own metaphysical struggle and triumph” The Times

There are so many good recordings of the Alpine Symphony on the market now, but this has moments that are as fine as any, and arguably the noblest overall shape of all.

no-one has quite Haitink's sense of the piece as a rational symphonic argument...The performance gathers strength and intensity as it proceeds...Admirers should not hesitate to acquire an archetypal example of Haitink's unobtrusive podium manner.

Haitink and the LSO give us a gripping, masterfully-paced account of this Alpine adventure. The climax of the storm is so shattering that it almost sounds as if parts of the Barbican are collapsing! Brass playing is stunning throughout: the trombones' pedal G as the protagonists reach the summit is worth the price of the disc alone!

This live recording of Strauss’s Nietzschean masterpiece [...] is thrilling in that simultaneously visceral and intellectual way that marks out Strauss. Haitink’s account [...] has immense grandeur.

Haitink draws out lucid instrumental detail from Strauss’s complex combinations of timbres, establishing apt colours in the summoning of atmosphere...his natural feel for the music’s fluctuating pulse lends this momentous journey an ineluctable sense of purpose, direction and exhilaration.