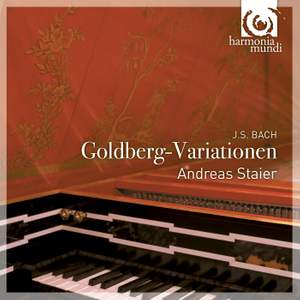 Andreas Staier on the Goldbergs.

"In the Goldberg Variations, Bach used the possibilities offered by the instrument's double keyboard. The work is totally suited to the harpsichord, whereas trying to play it on the piano is like attempting to square the circle." Andreas Staier

Andreas Staier waited nearly a quarter of a century to play the Goldbergs in public: his first performance of it was in Montreal at the end of April 2000. This is his first, long-awaited recording. Undoubtedly one of the most prominent harpsichord and forte piano performers in the world, Andreas Staier embarked upon a solo career in 1986 and, since then, his indisputable musical mastery has made its mark on the interpretation of baroque, classical and romantic repertoire. His extensive discography has won great critical awards from the international press: Mozart's Sonatas in two CDs, Haydn concertos with the Freiburger Barockorchester, Hamburg 1734 (with the German harpsichordist Christine Schornsheim). Recent releases have included Beethoven's violin sonatas with Daniel Sepec performing on Beethoven's own instrument and Schwanengesang with Christoph Prégardien on CD and DVD. The story about the Goldbergs’ composition is worth retelling: Johann Gottlieb Goldberg, one of Bach's brightest pupils, was working for Count von Keyserlingk of Dresden, who suffered from insomnia. Goldberg sometimes played all night to soothe the count. Bach was asked to write ‘quiet’ and ‘somewhat cheerful’ music for this purpose and he responded to the challenge brilliantly. A saraband theme, taken from a collection that Bach made for his wife, Anna Magdalena, is treated in a novel way. Rather than concentrating on the melodic line, Bach strengthens the bass line and harmonic structure. The variations are grouped in threes, with the third of each group being a canon. The 30th variation, the ‘Quodlibet’ is a lively juxtaposition of two popular melodies of the time. A composer of lesser genius would soon have become monotonous in attempting 30 variations in D minor, Bach, on the contrary, gives us an extraordinary range of expression.

“blessedly unreverential Bach, ebullient and extrovert, but also introspective and expressively searching when required.” The Guardian

Happily, Staier's effortless virtuosity (hear the trills in Variation 28!) and sensible musicianship go together to make this a strong Goldberg...The instrument is undoubtedly a major star here but that need not stop us from recognising its player as a master harpsichordist.

Staier sustains a courtly musical protocol in, for instance, the four-voice Fughetta of 'Variation 10', while elsewhere executing the complex hand-crossing of 'Variation 5' with a dexterity that presents the piece as part maze, part cascade.

Astounding — not so much because of Staier’s interpretative approach to Bach’s keyboard glory: it’s more the instrument he’s playing...The colour range is enormous. So is the sound’s breadth...There’s great musical theatre in every track, plus peerless beauty and intellectual heft.