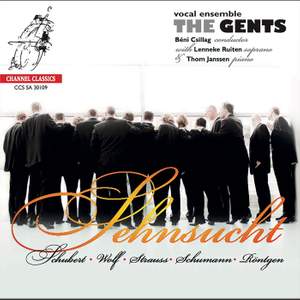 The nineteenth century was a golden age for choral singing in Germany and Austria. Beginning in 1810, singing clubs, and later on, choral societies, shot up all over this part of the world like mushrooms. You could join a Liedertafel, Liederkranz, or Männersangverein. Carl Friedrich Zelter, Mendelssohn’s teacher and the leader of the Berliner Singverein, was the first person to use the term “Liedertafel” in 1808. The term was used to indicate an informal meeting of poets, composers, and singers who came together to sing German partsongs.

In a letter addressed to Goethe, Zelter explained that the 25 members of his Liedertafel were accustomed to sit down at a well-furnished table for a sumptuous dinner followed by an evening of singing. Zelter’s group preferred original works, so freshly composed that the ink was still wet. The goal was stimulation and promotion of German poetry and music.

The Gents is unique All-male Dutch vocal ensemble that obtained in a very short period a prominent place within the international music world. The group of young singers is praised because of their special sound, the large degree of flexibility and the unequalled interpretation of the very divergent vocal repertoire. Whether it concerns religious music from the Renaissance, romantic English music, arrangements of contemporary jazz and pop songs or especially composed works for the ensemble, the concerts of The Gents are always an extraordinary experience. The concerts can count therefore on enthusiastic public and positive criticisms in the press.

Hypnotically homogenous of timbre, hushed and soft-focused, The Gents clearly relish Schubert's songs of night and of yearning

The 18-strong Dutch ensemble bring to their enterprising programme the essential technical finesse: a rounded, unforced sonority, refined chording and balance (un-hooty male altos blend euphoniously with the high tenors on the top lines), and near-perfect intonation...They are always alive to the sound and sense of the words