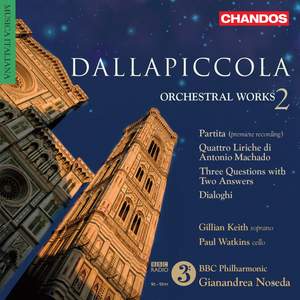 The jewel among this collection is the Quattro Liriche di Antonio Machado - one of those miniature song-cycles of exquisite beaty at which Dallapiccola was so adept...this is an important and... — BBC Music Magazine, April 2010, More…

No. 3. Senor, ya me arrancaste la que yo mas queria

The Musica Italiana series is very close to the heart of the Principal Conductor of the BBC Philharmonic, Gianandrea Noseda, and especially the music of Luigi Dallapiccola. From the moment of his appointment to the BBC Philharmonic Noseda spoke of his ambition to record the works of this twentieth-century composer.

The BBC Philharmonic has been praised in The Guardian for its performances both live (‘Noseda’s performance was both meticulous in its judgment of every shift in orchestral colour and filled with a sense of anticipatory tension. Dallapiccola’s melodies, angular yet lyrical, unwound with rapt introversion’) and in the studio (‘Noseda understands the music’s lyrical strength and fragile sound world perfectly; the playing of the BBC Philharmonic is exemplary too’).

Dallapiccola was in many respects the quintessential Italian, in love with lyricism, the Romance languages, classical antiquity, Dante, Monteverdi and Verdi. Yet a certain orientation towards Austro-German art led him to follow Busoni, Schoenberg and Webern in seeking new modes of musical architecture. Dallapiccola was to become the first significant Italian composer to embrace Schoenberg’s twelve-note method of composition. But he embraced it from a wholly Italianate direction, deriving his music from twelve-note rows but keeping them subservient to his lyrical and visionary expressive impulses.

Though he came to prominence in Mussolini’s Italy, Dallapiccola was a dedicated anti-Fascist, in danger of his life during World War II. Many of his works deal with the themes of persecution, imprisonment, resistance to tyranny, the importance of holding fast to civilised values. For him, art possessed moral force; it is this, combined with the refinement and perfectionism of his technique, that makes him such an abiding inspiration in a later age of cultural relativism.

In this latest volume the Partita receives its premiere recording. Gillian Keith takes the solo role in this, and in Quattro Liriche di Antoni Machado. Paul Watkins performs the solo in Dialoghi and the programme is completed with the 1962 Three Questions with Two Answers, a work thematically related to Dallapiccola’s opera Ulisse.

The jewel among this collection is the Quattro Liriche di Antonio Machado - one of those miniature song-cycles of exquisite beaty at which Dallapiccola was so adept...this is an important and welcome addition to the slender Dallapiccola discography.

Vol 2 includes two of the composer's most refined and characterful instrumental scores...and both are performed here with the kind of balance between striking details and sense of evolving shape which it's all too easy to take for granted in music that is a good deal more intricate than it may sound