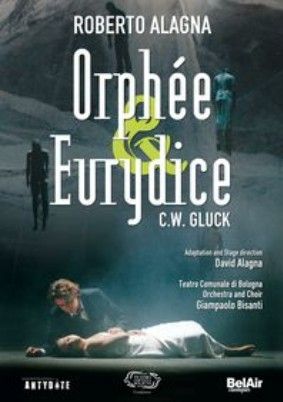 The first of several fade-cuts… takes us to the scene of a car crash, where paramedics pull Eurydice's body from the wreckage. Thence to the graveyard, whence all that follows is Orphée's dream.... — BBC Music Magazine, March 2010, 3 out of 5 stars More…

Filmed in High Definition at the Bologna Opera, January 2008

THE PERFORMANCE: Roberto Alagna as Orpheus in his brother David's new version of Gluck’s masterpiece. A major event recorded in Bologna.

Opting for the French-language version of Orpheus, David Alagna was faced with the task of achieving an appropriately subtle adaptation. In a plot transposed to the present day, Eurydice dies in a car accident on the day of her wedding and Orpheus's quest for his beloved is a dream beginning and ending at the cemetery. No happy ending in this interpretation, but a new approach to characterisation:Amore, sung by a baritone, becomes a funeral parlour employee and Orpheus' guide. Orpheus, of course, loses his loved one forever by turning to look back. World famous tenor Roberto Alagna throws himself body and soul into this production. His incredible vitality, flawless timbre and diction make him a great Orpheus. His partner, young Italian soprano Serena Gamberoni, is simply stunning as Eurydice, while French baritone Marc Barrard is suitably terrifying as the guide to the Underworld. The orchestra is conducted by Giampaolo Bisanti, who masterfully brings out all Gluck's poetry, romantic melancholy and depth.

The first of several fade-cuts… takes us to the scene of a car crash, where paramedics pull Eurydice's body from the wreckage. Thence to the graveyard, whence all that follows is Orphée's dream. If you can swallow the concept, the acting is detailed and humane, the Underworld a powdery fantasy of suspended animation. ...Robert Alagna's verismo Orphée is a perceptive study of sudden bereavement. Giampaolo Bisanti's conducting is fleet and finely accented...

The opening scene is set at Orpheus and Eurydice's wedding. The couple are involved in a car crash and soon the action changes to the cemetery as Eurydice's coffin is lowered into the grave. …as Orpheus descends into Hades, the set changes to a more abstract vision of a frozen Hell with bodies suspended in mid-air... The whole production veers between the sublime and the ridiculous in about equal quantities. Roberto Alagna as Orpheus gives a performance of great intensity...