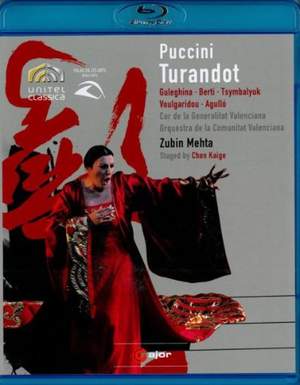 Turandot has always been one of Zubin Mehta's calling cards, and he rarely disappoints here in Valencia. The sweep of this great score is admirably balanced by a proper attention to orchestral... — BBC Music Magazine, August 2010, More…

This 2008 production is staged by Chen Kaige, the film director of Farewell My Concubine and winner of the Palme d'Or at Cannes Film Festival.

Shot in full HD, including Bonus material behind the scenes.

Maria Guleghina is one of the most celebrated and acclaimed sopranos of the world. The leading international tenor Marco Berti is recognised as one of the most important artists from Italy.

Turandot has always been one of Zubin Mehta's calling cards, and he rarely disappoints here in Valencia. The sweep of this great score is admirably balanced by a proper attention to orchestral and instrumental detail.

Drawing on his intimate knowledge of traditional Chinese theatre and spectacle, Chen and his designers, Liu King and Chen Tong Xun, give us a Turandot in extravagant colours and choreography, true to the spirit of fable and legend… Maria Guleghina must surely not be the Turandot of our time. The role seems to hold no terrors for her... Zubin Mehta's...direction of the Valenciana Orchestra brims with drama and affection.