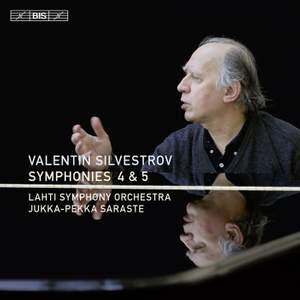 BIS's recording wonderfully captures all the layered sonorities and resonances of Silvestrov's orchestral web, and the Lahti Symphony play as if possessed. — BBC Music Magazine, April 2010, 5 out of 5 stars More…

Led by Jukka-Pekka Saraste, the Lahti Symphony Orchestra performs two symphonies by the Ukrainian composer Valentin Silvestrov. Having as a student absorbed the music of Webern, Scriabin and the new Polish school, in the 1970s Silvestrov moved away from avant-garde techniques and became increasingly involved with the idiom of 19th-century song. To date, Silvestrov has composed seven symphonies. Considered by some to be his masterpiece, Symphony No. 5 has been described as an epilogue inspired by the music of late Romantic composers such as Gustav Mahler.

BIS's recording wonderfully captures all the layered sonorities and resonances of Silvestrov's orchestral web, and the Lahti Symphony play as if possessed.

A symphonic logic that Jukka-Pekka Sarasate amply conveys in these responsive performances. Wholly natural sound… and informative notes round out an impressive release.