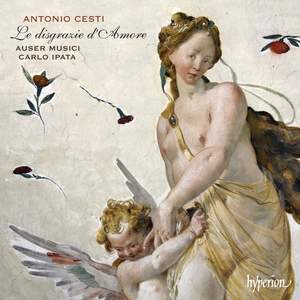 Most of these singers are accomplished, but the male soprano Paolo Lopez as Cupid is truly exceptional. The sound is good and the music is well-crafted. — BBC Music Magazine, March 2010, More…

So, for your enjoyment,
Love, who is so esteemed,
now ridiculed, insulted,
with his mishaps will provide the theme
for my delightful jests.
Even the fabled Gods
were ridiculed in olden times.

Pietro Antonio Cesti (born in Arezzo, 1623; died in Florence, 1669) was, along with Francesco Cavalli, the most illustrious representative of the seventeenth-century Venetian school of opera composers. Like many Seicento artists, he had an eventful life embracing multiple activities, as singer, actor, composer and maestro di cappella; like Vivaldi he took holy orders; and, like the murdered Stradella, he died in murky circumstances (probably by poisoning) after an outstanding musical career. He was an itinerant composer, dividing his activity between Venice and the courts of Florence, Vienna and Innsbruck. The work recorded here dates from his period at the Viennese court, and the opera is characteristic of Viennese opera’s synthesis between the comical, parodic register typical of the Venetian aesthetic (of which Cavalli’s La Calisto is a remarkable example) and the moral, edifying dimension inherent to court opera.

Most of these singers are accomplished, but the male soprano Paolo Lopez as Cupid is truly exceptional. The sound is good and the music is well-crafted.

It's nicely done, with some fine playing from Auser Musici under Carlo Ipata. Male soprano Paolo Lopez is an alluring Cupid, but Gabriella Martellacci (Flattery) and Carlos Natale (Deceit) have the best music and give the finest performances.