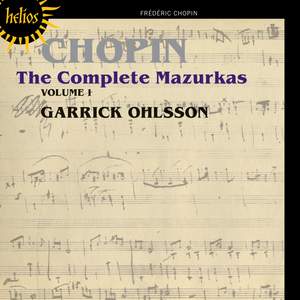 …Ohlsson brings a phenomenal variety of expression and depth of characterisation to these exquisite miniatures - an approach that manages to capture the folk elements of the composer's style... — BBC Music Magazine, February 2010, 5 out of 5 stars More…

Nineteenth-century works inspired by folk music come in many forms. As far as piano music is concerned, one thinks of such pieces as the arrangements of popular tunes that furnish Liszt’s Hungarian Rhapsodies and Brahms’ Hungarian Dances. But Chopin’s mazurkas are quite different in that a popular folk tradition, with the use of original thematic material, is developed and shaped by the composer’s invention.

The mazurka takes its name from the area of Mazovia around Warsaw, acquiring its status as a national and stylized dance form in the late eighteenth/early nineteenth century (long after the polonaise had done so). The term ‘mazurka’ is really a generic title for many regional dances that share similar characteristics, most notably the mazur, oberek and kujawiak. The features common to all are triple time, the strongly accented second or third beat (accompanied by a tap of the heel), and a dotted rhythm. Some of these regional variations are fast and wild (like the obereks), others are tinged with melancholy.

Chopin’s earliest essays in the form are the two mazurkas in B flat major and G major composed and published in Warsaw in 1826; the very last work he completed was the Mazurka in G minor Op 67 No 2, published in 1855. (See volume 2 for these.) In all, Chopin composed some 57 mazurkas (more if doubtful and spurious works are included) of which 41 were published during his lifetime in groups of three, four or five. The chronology of their composition is sometimes unclear. In some cases ideas Chopin had improvised waited some time before being committed to paper; further revisions and second thoughts meant additional delays before publication. Briefly, the nine mazurkas of Opp 6 and 7 were composed in Vienna in 1830 shortly after his final departure from Warsaw. The thirty-two mazurkas contained in Opp 17 to 63 were composed and published at fairly regular intervals between 1833 and 1847. The eight mazurkas of Opp 67 and 68, instructed by the composer to be destroyed but published posthumously by Julian Fontana, were written at various times between 1827 (Op 68 No 2) and 1849 (Op 67 No 2). A further thirteen have no opus numbers, mainly early works either published separately while Chopin was still alive or after his death—the one in A flat major, for example, composed in 1834 did not appear in print until 1930.

The first two sets on this volume, while not as distinguished as some of the later ones, nevertheless contain many of the characteristic devices Chopin was to use frequently: the triplet figure that opens Op 6 No 1 in F sharp minor, for instance, and the drone bass of No 2 in C sharp minor and No 3 in E major, which lends a rustic flavour to the music. This set, composed between 1830 and 1832, was dedicated to Countess Pauline Plater, a fellow exiled Pole and one of Chopin’s favourite pupils. The Op 7 set was dedicated to a Mr Johns, an American whom Chopin introduced to his friend Heller as ‘a distinguished amateur from New Orleans’. No 1 in B flat major is one of the best known of all the mazurkas.

The four mazurkas in each of the Op 17 (1834) and Op 24 (1835) sets mark a distinct advance in their depth of expression. Here Chopin begins to elaborate the mazurka from a short salon piece into something more ambitious and aristocratic in tone. Key changes from one section to another are subtly and poetically accomplished; codas of exquisite charm are introduced. Op 17 No 4 in A minor is one of the most important mazurkas and among Chopin’s most moving creations. There are few pages of piano music that are more despairing and helpless, a mood broken only by the central A major section. It is, says Charles Rosen, ‘an ideal Romantic fragment: complete and provocative, well-rounded and yet open’. Op 17 bears a dedication to the singer Lina Freppa, a friend of Bellini, Op 24 to the Comte de Perthuis, King Louis-Philippe’s director of music.

Schumann reviewed both the Opp 30 and 33 sets. Of the former, published in 1835 and dedicated to Princess Maria Czartoryska, he wrote: ‘Chopin has elevated the Mazurka to a small art form; he has written many, yet few among them resemble each other. Almost every one contains some poetic trait, something new in form and expression.’ The Op 33 set returns somewhat to the mood of Opp 6 and 7. ‘His forms seem to grow ever brighter and lighter—or are we becoming accustomed to his style?’, asks Schumann. ‘These mazurkas will charm every one instantly, and seem to us more popular in character than his earlier ones.’ Countess Roza Mostowska, another aristocratic Polish pupil of Chopin, was the dedicatee.

In a letter to his friend Julian Fontana written in June 1839, Chopin announced: ‘You know that I have four new mazurkas: one from Palma [Majorca, from where he and George Sand had recently returned], three from here [Sand’s house in Nohant]. They seem to me pretty, as the youngest children usually do when the parents grow old.’ The wonderful Op 41 mazurka in C sharp minor has a tune described by the critic James Huneker as ‘a little saddened by life, but courage never fails’; No 1 in E minor, the one written in Majorca, he characterizes as ‘sad to the point of tears’.

…Ohlsson brings a phenomenal variety of expression and depth of characterisation to these exquisite miniatures - an approach that manages to capture the folk elements of the composer's style to quite hypnotic effect.