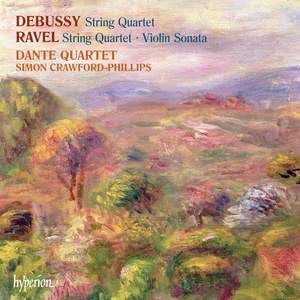 …it is surprising that Debussy composed his string quartet with no poetic or visual allusion. The Dante Quartet give a full-blooded performance… At the opening of the scherzo, it momentarily... — BBC Music Magazine, February 2010, More…

The Dante Quartet continue their award-winning exploration of the French string quartet with this disc which includes two of the greatest works of this genre.

Both quartets dazzled and disturbed at their first performances. Debussy’s fantastic, spiralling variations, resisting orthodox ‘development’ of ideas, is described as reminiscent of Monet’s in recording the variations of light on the façade of Rouen Cathedral. Traditionalist commentators were shocked, but the exotic beauty of the writing excited many, including the young Ravel. Ravel’s Quartet is to some extent an hommage to Debussy, but, typically, also a work of startling originality.

Also included is Ravel’s Violin Sonata No 2 in G major, an intriguing, jazz-influenced work, energetic but with a dark undertow of pain; written, as Ravel said, with the aim of ‘exploring the basic incompatibility of violin and piano’.

…it is surprising that Debussy composed his string quartet with no poetic or visual allusion. The Dante Quartet give a full-blooded performance… At the opening of the scherzo, it momentarily seems that they… are playing as if they have hammers, but this is immediately tempered with an exquisite reining-back. Similarly, the transition to the central section of the scherzo in Ravel's Quartet fades to a whisper, as preparation for the sublime dream-world ahead.

They find all manner of shading and delicacy in the Debussy; their Ravel is a miracle of feather-light tone and seamless phrasing.

...the way melodies seem to emerge subtly from the texture before retreating back into it [in the Debussy] is most appealing...The Ravel Quartet, too, is unfailingly musical.

The Dante Quartet...has an impeccable sense of style and these are in every way beautifully played and recorded performances.

The Dantes are one of the finest newish quartets based in Britain... alive to every nuance of these ever-fascinating works.

The splendid Dante Quartet capture beautifully both the shifting light on Debussy's impressionist canvas and the luminous filigree of Ravel's transcendent creation.

The shifts of light and shade in Debussy’s String Quartet are ear-catchingly etched in by the Dante Quartet...The distinctions of style are well made.