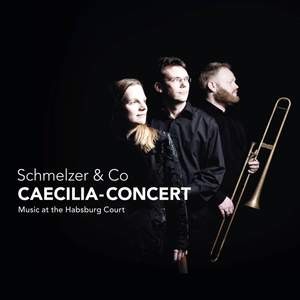 How expertly do all these players execute these remarkably adventurous works within the most rigorous principles of good chamber-music playing. Intonation is outstanding...and the personality... — Gramophone Magazine, April 2010 More…

The versatile ensemble Caecilia-Concert, a group which specialises in the interpretation of 17th century music for instruments and voices, here perform pieces by a range of German and Italian Baroque composers who worked at the Habsburg Court including Johann Heinrich Schmelzer, Johann Joseph Fux, Marco Antonio Ferro, and Antonio Bertali. The works included on this CD are among the last, highly virtuosic compositions for a range of period instruments like the cornetto and the dulcian. In the 18th century, the leading role of these instruments was taken over by more ‘modern’ instruments such as the baroque oboe, the baroque bassoon, not to mention the violin and cello, but during the 17th century compositions for these instruments were extremely popular at the Great court of the Habsburgs in Vienna. Many of the leading composers of the day, including Schmelzer and Fux, took up residence there and wrote many delightful pieces. The group Caecilia-Concert was formed in 2001 by a group of young instrumentalists who were already working at the forefront of authentic performance practice in Europe. The aim was to rediscover and bring to today’s audiences music which had been lost, forgotten about, or had simply lain for hundreds of years in the shadows of other great works. Since then, Caecilia-Concert has not only made a name for itself as a virtuosic, flexible, small-scale recital ensemble of the highest international level, but has on occasion, expanded to incorporate other instruments and singers performing rarely heard masterpieces from Italy, Germany, Austria and The Netherlands.

How expertly do all these players execute these remarkably adventurous works within the most rigorous principles of good chamber-music playing. Intonation is outstanding...and the personality of this regional central European 'dialect' is captured with warmth and caprice...A fine and unusual recital.