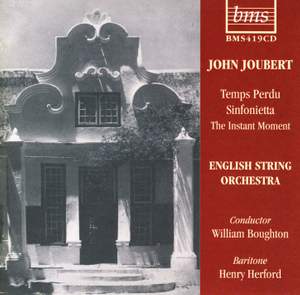 “The origins of this recording go back to a one-day festival of music organised by William Boughton to celebrate my sixtieth birthday which took place at the Adrian Boult Hall, Birmingham on 21st March 1987. The English String Orchestra had already commissioned and premiered Temps Perdu, and it had always been William Boughton’s intention to bring together the two E.S.O. Commissions on a single disc. This CD bring that wish to fruition.” John Joubert, April 1996