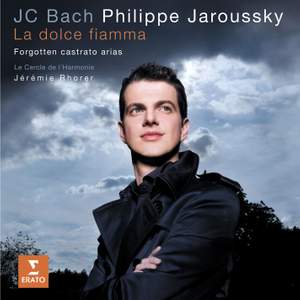 You can't help... but be seduced by the passion and range of Jaroussky's singing, which embraces everything from perfect coloratura to rapt introversion. — The Guardian, 7th January 2010, 4 out of 5 stars

This Deluxe version comprises of a casebound deluxe CD-book - the 96 page book tells the story of JC Bach including many rare illustrations, sung texts in original language and English, French & German.

“Jaroussky soars as effortlessly as a bird, with no sense of strain: perhaps this is how the great castrati of the 18th century sounded.” Gramophone

Philippe Jaroussky’s last operatic recital for Virgin Classics collected arias written for a castrato singer, Carestini, whose star had been somewhat eclipsed by his contemporaries Farinelli and Senesino. With this recital, the French countertenor, with his voice of “startling beauty” (Classic FM) turns to a composer who – despite his famous surname, his celebrity in his lifetime, and his influence on the young Mozart – is still not given his full due: Johann Christian Bach (1735-1782). This new recital brings together arias from six of his operas, written for Milan, Mannheim and London, the city in which he spent the last 20 years of his life and where, in 1764, he met the Mozart, then a touring child prodigy.

“I like taking on the role of an interpreter who brings forgotten musicians the attention they deserve,” says Jaroussky, whose last Virgin Classics release, Opium featured some French rarities from the late 19th and early 20th centuries. “It was time to bring J.C. Bach out of Mozart’s shadow … He was a fan of Mozart’s, but his own worth should be recognised. His music is very intelligently written. It shows off the wind instruments, he was a master of ornamentation and there is a dialogue between voice and orchestra, although the tessitura of the vocal writing presents a real challenge, often ranging across two octaves.” Jaroussky’s art thrives on virtuoso demands of this kind; as The Times said: “What Jaroussky does with a formidable counter-tenor range is to make the words dance in fleet-footed rhythms – and to tell a story as though it were headline news.” The singer himself has researched this rarely performed music, returning to the original scores: “It’s like searching for hidden treasure,” he says.

The name of one of the operas is familiar, Orfeo ed Euridice, but the aria recorded here was written by Bach for insertion into Act 1 of Gluck’s most famous work.

Jaroussky’s partners on this disc are Le Cercle de L’Harmonie and Jérémie Rhorer, who played such an important role in soprano Diana Damrau’s Virgin Classics recitals Arie di bravura and Mozart: Donna. For Jaroussky’s tour of this J.C. Bach programme, scheduled for Hamburg, Berlin, Munich and Katowice (Poland) in November 2009, and Istanbul and London in December, they will be replaced by the equally distinguished and dynamic – and conductorless – Concerto Köln.

You can't help... but be seduced by the passion and range of Jaroussky's singing, which embraces everything from perfect coloratura to rapt introversion.