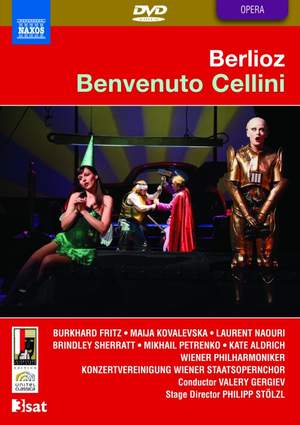 ‘A mixture of futurism à la Metropolis, fantasy à la Batman and quotes from Piranesi’s Carceri, juxtaposed in the form of photo montages, enhanced with . . . robots, a helicopter, a shark and the winged vehicle of a pop star Pope’ Neue Zürcher Zeitung

A high-calibre cast, headed by Burkhard Fritz as the temperamental Renaissance artist and the 26-year-old Latvian soprano Maija Kovalevska as Teresa, the woman with whom he tries to elope.

“[Conductor Valery Gergiev] pulled out all the stops. He whips the Vienna Philharmonic into a delirium similar to that which possibly took hold of the composer.” Der Standard