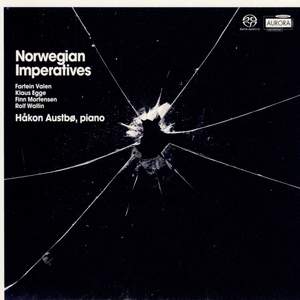 Austbø is a model of lucidity, teasing out poetry from between the arid stones in this austere yet not uninteresting repertoire. His booklet-note is correspondingly clear-sighted and Aurora's... — Gramophone Magazine, July 2010 More…

Written between 1935 and 2001, the mu sic on this album forms a unique line from teacher to student in Norwegian piano music through 66 years. Norwegian composers after Grieg for the most part wrote in a nationalistic style, with one exception, Fartein Valen who became a true internationalist and developed his unique style out of German late romanticism and the 2nd Viennese school. His pupil Klaus Egge started out writing music much in relation to folk music, but developed toward a less tonal and more polyphonic style. Finn Mortensen started taking lessons with Egge just before the Second World War, but soon disappeared into the underground resistance and never completed his studies.

After the war he came into contact with the electronic studios of Stockhausen in Cologne, and is given the credit for bringing musical modernism to Norway. One of the most prominent of his students is Rolf Wallin, a composer with a very personal style incorporating distinctive harmonic colours. Norwegian pianist Håkon Austbø is internationally known for his work in contemporary music. Having lived and worked out of the Netherlands for more than 30 years, Austbø has recently returned to his home country. His numerous recordings, among them the complete piano works of Messiaen, have received many awards.

Austbø is a model of lucidity, teasing out poetry from between the arid stones in this austere yet not uninteresting repertoire. His booklet-note is correspondingly clear-sighted and Aurora's recording quality is clear yet atmospheric.