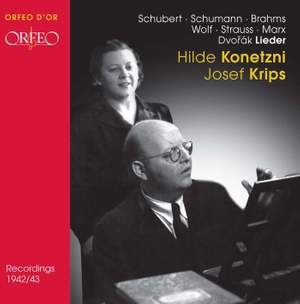 No. 1. Mein Lied ertont, ein Liebespsalm (I chant my lay, a hymn of love)

No. 3. Rings ist der Wald so stumm und still (Silent and lone the woods around)

No. 4. Als die alte Mutter (Songs My Mother Taught Me)

No. 6. In dem weiten, breiten, luft'gen Leinenkleide (In his wide and ample, airy linen vesture)

The recording conditions could hardly have been more dramatic, made in the bleak mid-war winter of 1942-3, lirico-spinto soprano Hilde Konetzni in a Romantic song programme with Josef Krips as her accompanist and mentor. Konetzni is best known as the Sieglinde in two complete recordings of the Valkyrie under Wilhelm Furtwängler; Krips had been banned from working by the Nazis, so his coaching activities had to be carried out underground, under a constant threat to his life.These private recordings were made by Hermann May, the then sound engineer of the Vienna State Opera, and can now be released on CD thanks to their careful restoration by the Eichinger recording studio in Vienna in collaboration with Gottfried Kraus. The result will delight more than just those interested in Josef Krips's legendary talent for carefully coaching singers, on account of the warmth and immediacy of the ensemble achieved by Konetzni and Krips.This is just as evident in the songs by lesser-known composers such as Robert Franz and Joseph Marx.The Gypsy Melodies by Antonín Dvorák are both the highpoint and the culmination of this recital, not just on account of the interpretative art they display, typical of the time, nor merely as a document of two artistic personalities. But as testament to a friendship that was sustained despite adversity.