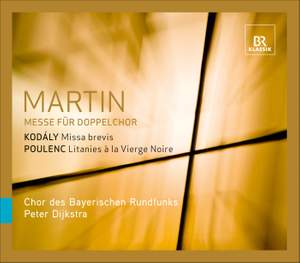 There is much stunning choral singing on this disc, beautifully blended tonally, precisely calibrated dynamically, and shaped with the measured skilfulness of a bespoke tailor. — BBC Music Magazine, April 2010, 4 out of 5 stars

“Widely regarded as one of the world’s finest small professional choirs” (musicweb- international.com), “one of the best professional choruses on the international scene” (klassik-heute.com), “moments, which in their musical culture make the ensemble truly unique” (Münchner Merkur) – these comments and similar ones show that the Chor des Bayerischen Rundfunks is a leading figure in the world of choral music.

Frank Martin was on the program of Peter Dijkstra’s inaugural concert in October of 2005, when he – an authentic shooting star on the choral scene – assumed the direction of the Chor des Bayerischen Rundfunks at the sensationally young age of 0nly 26. The same composer is now also featured at the beginning of a-cappella production for the BR-KLASSIK label, on which the chorus presents itself under its director Peter Dijkstra. Frank Martin’s Mass for Double Chorus, which was not given its world première until 40 years after it was composed, has nevertheless ranked since then as one of the Swiss composer’s major works. Zoltán Kodály’s Missa brevis is directly marked by powerless despair over the horrors of World War II. Francis Poulenc’s Litanies à la Vierge Noire was prompted by a far more personal motivation. He composed the work on the death of his composer friend Pierre-Octave Ferroud in 1936, a short time after Poulenc had found his own way to religion on a pilgrimage.

There is much stunning choral singing on this disc, beautifully blended tonally, precisely calibrated dynamically, and shaped with the measured skilfulness of a bespoke tailor.