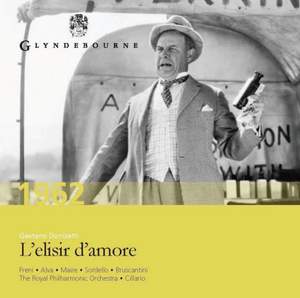 …this marvellous account from 1962, with Mirella Freni and Luigi Alva the ideal Adina and Nemorino. …everyone here is ideal, and their performances are so vivid that you feel you are seeing... — BBC Music Magazine, January 2010, 5 out of 5 stars More…

Designed and Directed by Franco Zeffirelli.

Glyndebourne Opera has a history of trend setting and pioneering opera productions and Donizetti’s opera L’elisir d’amore is no exception. Popular in Donizetti’s own lifetime, L’elisir faded into relative obscurity until the 1890s when Caruso championed the role of Nemorino: his dedication and conviction were such that Covent Garden arranged a production of the opera in 1902. L’elisir was a personal favourite of Caruso’s, so much so that in 1920 he played Nemorino in his last appearance with the Metropolitan Opera. Almost 60 years later, in 1961, it was Glyndebourne who staged a production of L’elisir d’amore designed and directed by Franco Zeffirelli. Such was the success and acclaim for this production that Glyndebourne revived it in 1962, enhancing the production with the addition of the lively and capricious Mirella Freni.

As the press noted: ‘Her [Freni's] looks and her cantabile singing melt, so to speak, on the tongue, and she acts her teasing charades with Sergeant Belcore as if nothing were farther from her mind than cruelty.’ (The Times, August 1962) and ‘Mirella Freni, the sparkling new Adina, rightly allowed real tenderness to shine through vanity and caprice.’ (The Sunday Times, August 1962)

Mirella Freni was first engaged by Glyndebourne in 1960 (and sings Susanna in Glyndebourne’s own recording of Mozart’s Le nozze di Figaro GFOCD00162).

Previously she had also performed at the opera house in Torino in the late 50s and sung with Netherlands Opera in 1959-60 season, but her international break and recognition came by virtue of her role as Adina in this 1962 production.

This recording, released here for the first time, precedes Freni’s EMI recording of L’elisir d’amore with Nicolai Gedda as Nemorino in a Rome Opera production by some 5 years. In this recording, Freni has a cast of equals around her. As the besotted Nemorino, Luigi Alva vividly portrays the wounded innocent with The Daily Telegraph noting in August 1962 that ‘Alva’s Nemorino is a wonderful combination of rustic clowning and exquisitely finished bel canto’, with Enzo Sordello a baritone voice big enough to fill a stadium, providing a fresh virile and bold Belcore. Conductor Carlo Felice Cillario enjoyed a 60 plus year career and is remembered for his masterful interpretations of Puccini, Verdi and Donizetti operas and stands as one of the most singer-friendly conductors of all time.

…this marvellous account from 1962, with Mirella Freni and Luigi Alva the ideal Adina and Nemorino. …everyone here is ideal, and their performances are so vivid that you feel you are seeing them. Carlo Felice Cillario was the perfect conductor of this genre, light in touch, knowing when to slow down for a brief sentimental effect. This is among the best recordings, if not the best, ever made of this work.

This is the best recording so far to have emerged from the Glyndebourne archives.

Cillario and his players… are never over-heavy or thumpy, and Bruscantini is nearly always good to hear. But the real star(s) are Freni, Freni and Freni - a gorgeous-voiced mix of tease, wit and seriousness, whose success in a role she kept in her repertoire until the 1980s was important in escalating her international career. And... Alva, whose more-upper-class-than-usual Nemorino is good at finding playboy self-illusion in the voice.

You can almost feel the early-evening sunshine on this glorious 1962 recording from Glyndebourne, issued on the company's own label in 2010 and featuring Mirella Freni's treasurable Adina alongside Luigi Alva's elegantly sung Nemorino. Carlo Felice Cillario - one of the great early ambassadors for Donizetti - injects brio and class into the score in equal measure.

For the traditionalist, this live 1962 recording will bring back memories of Glyndebourne's glory days... Mirella Freni and Luigi Alva sparkle as the lovers.