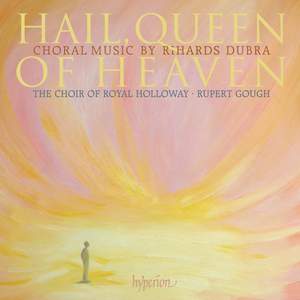 Rihards Dubra, born in Riga in 1964, spent his early years under a Soviet regime for which any public performances of sacred music constituted religious propaganda and were not permissible. During his studies with Adolfs Skulte at the Latvian State Conservatory, Dubra began to test the boundaries of political acceptance in the last remaining years of Soviet rule. He has now emerged from the largely secular tradition of choral music-making in Latvia as a distinctive voice, that of a composer devoting himself exclusively to the composition of sacred music. The purity of this endeavour is one that Dubra has admired in the work of so-called ‘holy minimalists’ such as Arvo Pärt and John Tavener. Dubra prefers to describe his own music as ‘a style of meditation’—one instilled with the essence of the Middle Ages ‘through the view of a man who lives in the twentieth century’.

This recording represents a selection of pieces, from early experimentation to fully formed style—a style that fuses minimalism and neo-romantic melodies with the inflections and philosophy of Gregorian, Medieval and Renaissance music. The Choir of Royal Holloway is directed by Rupert Gough in this their debut recording for Hyperion.

Dubra's natural home is a mood of controlled meditation and lyrical clarity as in Felix namque es and the more overtly experimental rhythmical and textural techniques of Stetit Angelus but, at times, a more lively exuberance is evident in Duo Seraphim. This style is well handled by the Choir of Royal Holloway, whose clean-edged sound, under Gough's sympathetic direction, warms to the generous acoustic of St Alban's, Holborn.