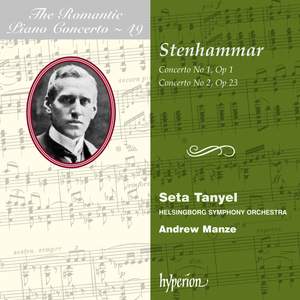 Manze was a shrewd choice of conductor, as was Seta Tanyel as soloist, a pianist whose lyrical grace is matched by a no-holds-barred bravura… — Gramophone Magazine, January 2010 More…

Stenhammar: Piano Concerto No. 1 in B flat minor, Op. 1

Welcome to a genuinely outstanding disc in the Romantic Piano Concerto series. Sometimes the works found along the unfrequented byways of the Romantic piano tradition can exhibit no more than surface brilliance, but that cannot be said of these two splendid concertos by Stenhammar, recorded for the first time together on one CD.

The original orchestration of Stenhammar’s Piano Concerto No 1 is recorded here: a version which was long thought lost when the publishers were bombed during the second world war – a copy of the original was discovered in the Library of Congress in 1983. The twenty-two year old’s Opus 1 is a masterpiece, majestic and virtuosic at its opening; bringing the listener into a world of Nordic mystery at the start of the third movement; the finale ending with music of sad, reflective sweetness. The second concerto is a distinctly different work, with an novel, some have said ‘improvised’, structure, and a sense of tension between soloist and orchestra which is only resolved in the glorious virtuosic finale.

Hyperion is delighted to present the distinguished musician Andrew Manze in his new incarnation as a conductor. Directing the Helsingborg Symphony Orchestra, he is truly a force to be reckoned with. Pianist Seta Tanyel has featured on previous RPC recordings, always gaining the highest critical acclaim; however her magnificent playing on this new disc transcends her previous achievements.

Manze was a shrewd choice of conductor, as was Seta Tanyel as soloist, a pianist whose lyrical grace is matched by a no-holds-barred bravura…

Wilhelm Stenhammar's two piano concertos are astonishing works, and their neglect outside the composer's native Sweden is shameful...The performances, bigger in scope and scale than any we've heard before, are exceptional. The soloist is Seta Tanyel, formidable in her declamatory intensity and lyrical weight. Andrew Manze, meanwhile, conducts with steely commitment.