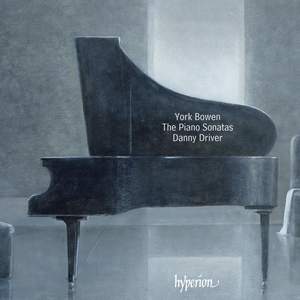 Danny Driver, whose debut on Hyperion was an acclaimed recording of Bowen's Third and Fourth piano concertos, is the ideal advocate for this glorious music, playing with razor-sharp articulation... — Gramophone Magazine, December 2009 More…

The recent revival of York Bowen’s music, very much spearheaded by Hyperion, has spawned a plethora of new recordings of his compositions, and won him many new admirers. Among the new releases, this disc of Bowen’s piano sonatas is a uniquely important collection. It contains three premiere recordings, including two recordings of previously unpublished sonatas performed (with special permisson) from the manuscripts. It is thus the first ever recording of the complete sonatas – an unmissable opportunity for piano enthusiasts.

Hyperion is delighted to welcome back the young virtuoso Danny Driver who was enthusiastically acclaimed for his masterly, stylish and technically dazzling performances of Bowen’s Third and Fourth Piano Concertos, and described as an ideal performer of these works.

Danny Driver, whose debut on Hyperion was an acclaimed recording of Bowen's Third and Fourth piano concertos, is the ideal advocate for this glorious music, playing with razor-sharp articulation and a rich, organ-like sonority… while characterising Bowen's ruminative slow movements with tender introspection and an improvisatory air…

Danny Driver plays the canon of six sonatas with a blend of warmth, bravura, expressive sensibility and verve … Driver’s superb, astute performances are convincing testimonies to Bowen assimilating stimuli with a potent
imagination of his own