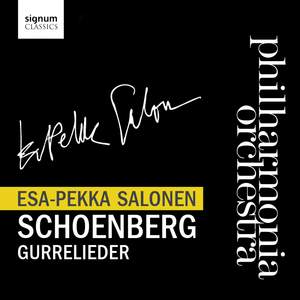 …exciting, lucid, wonderfully well-proportioned, and recorded in stunning sound the final hymn to the rising sun would lift the most morbidly lethargist out of their chair. — BBC Music Magazine, December 2009 More…

Recorded as part of the orchestra's ongoing 'Vienna - City of Dreams' concert programme, the latest release in Signum Records' ongoing series with the Philharmonia Orchestra is Schoenberg's choral and symphonic masterpiece Gurrelieder, performed live with Philharmonia Voices, City of Birmingham Symphony Chorus and other star soloists, led by Esa-Pekka Salonen. September 21st is the release date for this SACD/CD hybrid recording which is a double disc release in surround sound and stereo. A few weeks later, ‘City of Dreams’ comes to an end when Salonen conducts Berg's opera Wozzeck, also at the Royal Festival Hall. Epic, opulent and often challenging, Gurrelieder made a decisive opening statement for ‘Vienna: City of Dreams’. Written between 1901 and 1911 it progresses from swooning post-Tristan Romanticism to stark, violent Expressionism, and even introduces Schoenberg's revolutionary Sprechgesang. As The Independent said in its review: "In a little under two hours, the 19th century ended and the 20th began … should City of Dreams continue in this fashion, it will be unmissable." Future plans for Philharmonia/Signum releases conducted by Esa-Pekka Salonen include: Mahler's 6th and 9th symphonies, Berlioz's Symphonie Fantastique, Stravinsky's Firebird and Janácek's Sinfonietta.

"How fitting that the opening concert of Esa-Pekka Salonen's Philharmonia series City of Dreams: Vienna 1900-1935 should conclude with the mightiest wake-up call in all music … Schoenberg's scoring at its most fantastical - was despatched with great virtuosity." The Independent 4 Stars

"Vienna - City of Dreams… looks set to be one of the musical highlights of 2009 if Esa-Pekka Salonen's sensational account of Schoenberg's seminal Gurrelieder at the Festival Hall last weekend proves typical. … It was a brilliant, bold and generous masterstroke to open the festivities with Schoenberg's song-symphonic epic… Salonen charts Schoenberg's journey with an unerring command of his vast forces" The Sunday Times

…exciting, lucid, wonderfully well-proportioned, and recorded in stunning sound the final hymn to the rising sun would lift the most morbidly lethargist out of their chair.

...you can hear why it was critically acclaimed for the quality of the soloists, the impact of the choruses, and above all the playing of the Philharmonia – from transparent impressionistic textures to vast, bone-crunching climaxes. It’s an exhilarating journey from illicit love to redemption, and the sense of live adrenaline only increases the impact of Schöenberg’s score.

The opening songs have a featherweight transparency, the interludes a natural fluency … and the choral climax transmits a properly ecstatic, pantheistic glow

The Signum engineers have performed miracles to match and convey those of Schoenberg's prodigious orchestration. The 90 male voices divided by 16 parts in the Wild Hunt is around a third the number that Schoenberg had in mind but they are a convincingly rowdier bunch than Ozawa's Tanglewood Festival Chorus at almost the same hectic stampede... Nor need the Philharmonia fear competition: they play superbly...

This is a voluptuous, feverish and thrilling performance, characterised also by the clarity of vision and texture that have always been Salonen’s hallmarks.

The narrator... is the great German actor Barbara Sukowa, and as a consequence, the climactic Wild Hunt of the Summer Wind is about as heart-rending as it can possibly get.

Dramatically realised here by the Philharmonia under Esa-Pekka Salonen, Gurrelieder is a fascinating work which illuminates the development of Schoenberg's compositional style.

Sometimes less is not more. More is exhilarating. ... the music-making was superb ... And what terrific soloists!