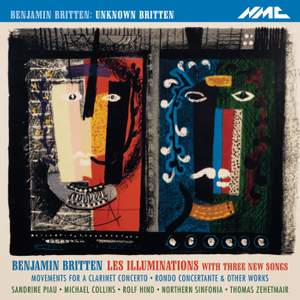 Britten completed but didn't orchestrate the songs - 'Phrase', 'Aube' and 'À une raison'; Matthews matches them finely to the style of Illuminations. While the cycle is often associated with... — BBC Music Magazine, November 2009, 4 out of 5 stars More…

Britten: In memoriam Dennis Brain for 4 horns and strings

Britten: Movements for a Clarinet Concerto for clarinet and strings

Recording of the Week,  Unknown Britten

NMC Records release a collection of rediscovered works by the British composer, including a clarinet concerto commission by Benny Goodman, and three songs originally intended for Les Illuminations.

• and the completion of Movements for a Clarinet Concerto.

The stunning performance of Les Illuminations by world-renowned soprano Sandrine Piau has been made possible thanks to the French label Naïve kindly releasing Sandrine from her exclusive recording contract for this CD. The ‘Clarinet Concerto’ was written for jazz star Benny Goodman, but Britten never completed it as the sketches were impounded by US Customs in 1941. It was Britten’s intention to resume work on the piece in 1943 but he never got round to it and so it remained a fragment, not performed until edited by Colin Matthews in 1990.

Britten intended the additional three songs recorded here—also setting Rimbaud—to be part of Les Illuminations. Sandrine Piau’s love affair with the music of Benjamin Britten blossomed when she was chosen to sing the role of Flora in Britten’s Turn of the Screw at Radio France.

In memoriam Dennis Brain for 4 horns, strings and tubular bells commemorates the great horn player for whom Britten wrote his Serenade for tenor, horn and strings. He died in a car crash in 1957.

Britten completed but didn't orchestrate the songs - 'Phrase', 'Aube' and 'À une raison'; Matthews matches them finely to the style of Illuminations. While the cycle is often associated with pears and other tenors… Piau is a worthy successor, cooler and less emotive than Pears, perhaps less nuanced but more naturally phrased, and simply more beautiful.

Sandrine Piau makes a superb soloist – impeccable French, or course, but she brings so much more to bear with her cool, clear sound, and often seriously beautiful phrasing, floating ethereally to the centre of Rimbaud’s poetry...Buy this for Les Illuminations, but savour it for so many new discoveries.

All the performances are superb. Sandrine Piau's stylish and imaginative interpretation of Les illuminations is one of the best soprano versions on disc, in fact. Michael Collins's easy virtuosity in the Clarinet Concerto is a joy. And throughout, Thomas Zehetmair elicits razor-sharp, sensitively shaped playing from the Northern Sinfonia. In short, this is one of the most important Britten recordings in many a year.

this performance, taken from a Northern Sinfonia concert with Sandrine Piau as the delightfully idiomatic soloist, includes as an appendix three further Rimbaud settings that ­Britten omitted from the final cycle and left in piano score, which have been ­orchestrated by Colin Matthews...lots of little ­insights into Britten's musical world.