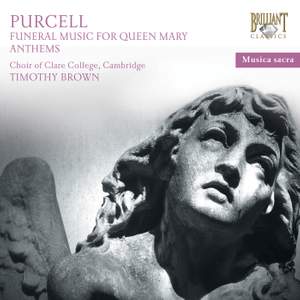 Man that is born of a woman

In the midst of Life

November 1694 was a busy month for Purcell. First, the triumphant return to London of King William III from the campaign in Flanders saw the composer produce a new anthem depicting the vanquishing of the King’s enemies. Secondly, for the celebration of St Cecilia’s Day, composed not the expected ode, but a Te Deum and a Jubilate. The Te Deum is full of grandeur, with the extra trumpets adding some thrilling drama to sections of the work. The scoring is also intimate, with some of Purcell’s most personal music – especially ‘ Vouchsafe, O Lord’, where the piling up of dissonances depicts a cry for mercy remarkable for the period.

These two works are masterpieces in Purcell’s output. However, the triumph was to be short-lived. In December 1694 a smallpox epidemic swept London, and Queen Mary died on 28 December. Purcell produced some of his greatest music for the Funeral Sentences, which he composed for her burial Setting words found in The Book of Common Prayer, Purcell’s music is moving and austere, and the sense of grief is almost palpable. The muted drums and Flatt trumpets in the Canzona leave a lasting impression on the listener. Purcell himself was dead eleven months later, aged 36.