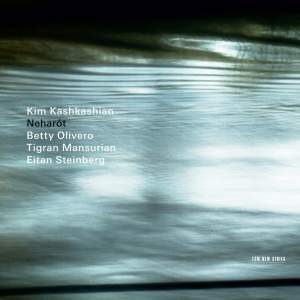 Mansurian: Tagh For The Funeral Of The Lord

An album like an intense journey, tied together by Kim Kashkashian’s outstanding musical personality, this is a perfect addition to her wide-ranging ECM discography, highlighting the most touching vocal qualities of the viola in intriguing works by Olivero, Steinberg and Mansurian.

Nostalgia and feelings of separation and suffering due to the political situations in Israel and Armenia form a common thread throughout Kim Kashkashian’s new CD. The compositions – melodious and complex – are by three important masters who incorporate tonality in their contemporary musical language. In particular, Betty Olivero’s Neharót is one of those unforgettable pieces with the potential to stick in listener’s minds and to become a radio hit.

With five pieces respectively based on traditional laments of the Near East, Armenian chant and Hasidic melody, the focus is on essentially vocal expressiveness. Israeli Betty Olivero started work on Neharót Neharót in response to the suffering and pain caused by the war in Lebanon in 2006. Her hypnotic lament for viola and chamber orchestra draws on allusions to Kurdish and north African songs, traditional oriental music and Monteverdi. The viola's singing abilities come even more to the fore in Tigran Mansurian's Three Arias - sung out the window facing Mount Ararat which articulate the Armenian people's longing for the holy mountain beyond the border. Rava Deravin by Israeli Eitan Steinberg is based on a melody for a poem by one of the greatest traditional kabbalists and was first conceived for voice and instrumental ensemble. According to the composer, Kashkashian "manages to cry the prayer from within the strings, to murmur the sacred text with no words".

…the pièce de résistance on this CS is Betty Olivero's powerful and densely-worked Neharót Neharót ('rivers, rivers', denoting, says the composer, women's tears). Scored for two string ensembles plus accordion and viola solo, this may only last 16 minutes, but it has the resonance of a major work. ...its denouement is a brilliant rumination, at first veiled, then gradually more explicit, on the lament of Monteverdi's Orpheus.