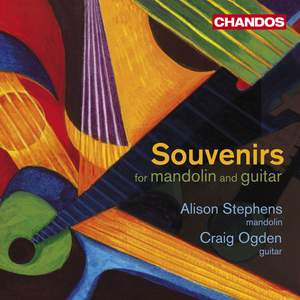 for mandolin and guitar

Hadjidakis: Mother and Sister (Arr. for Mandolin and Guitar)

Theodorakis: Where Has My Boy Flown to? (Arr. for Mandolin and Guitar)

This album of rarely recorded repertoire follows the much admired previous release of 1999: the Music from the Novels of Louis de Bernieres (CHAN9780). This album was the catalyst of a very successful musical duo that has now performed in concert and on tour across the UK and around the world for the last 10 years.

Both the mandolin and guitar are intrinsically linked to indigenous music from across the world. This CD is a celebration of a ten year musical partnership and of two incredibly hardy and adaptable instruments which have the unusual ability to bridge musical styles and cultures in a way that perhaps few other instruments can. Through their joint venture, Craig and Alison have developed a repertoire of unusual music from Columbia, Mexico, Greece and many other countries to go alongside their more classical concert repertoire.

Craig and Ali remark; ‘It should prove a very eclectic and interesting album that would appeal to a wide variety of plucked instrument lovers as well as an easy to listen to and immediately lovable sound world for all music lovers. The pieces have certainly proved popular when they have been performed at concerts. ‘

The album contains the premiere recordings Armin Kaufmann, Diferencias by Kiouphides, Mount Fiji by Stephens and Suite Venezolano by Zambrano

There is added facet to the album with Alison Stephens’ royalties being donated to MacMillan Cancer Support.

Souvenirs is a seriously fun disc: fun because of the festive nature of much of the music and of the obvious musical chemistry between Ogden and Stephens; serious because of the outstanding artistry and technical proficiency displayed by the two artists.