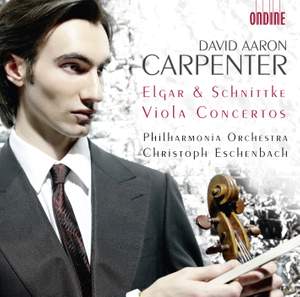 I wasn’t expecting the breadth of the concerto’s opening to be as successfully captured, not just in Carpenter’s plangent, vocal sound, but with the intimate warmth of the Philharmonia, and Christoph... — Charlotte Gardner, bbc.co.uk, 14th September 2007 More…

Ondine is delighted to present 22-year-old, New York-born violist David Aaron Carpenter’s debut recording. This will be the first of several recordings under a recent agreement between Ondine and the artist. David Aaron Carpenter has been the protégé of several major international musical figures, such as Pinchas Zukerman, Yuri Bashmet and Christoph Eschenbach.

David Aaron Carpenter has recently emerged as one of the world’s most promising young talents, winning, in 2006, the prestigious Walter E. Naumburg Viola Competition and being the 2007 protégé for The Rolex Mentor and Protégé Arts Initiative, the youngest in this mentorship programme’s history.

David Aaron Carpenter adapted much of the Elgar Concerto himself, using the well-known and Elgar-sanctioned arrangement by Lionel Tertis as his basis.

Ondine shares in David Aaron Carpenter’s mission to focus attention on the viola as a great solo string instrument in its own right.

“It has been many years since I heard such a phenomenal talent as David Aaron Carpenter. He combines an endless imagination with a staggering technique, and making music together with him is a true joy.” Christoph Eschenbach

I wasn’t expecting the breadth of the concerto’s opening to be as successfully captured, not just in Carpenter’s plangent, vocal sound, but with the intimate warmth of the Philharmonia, and Christoph Eschenbach’s effortless accompaniment...but it’s the stunning conviction and searing performance of the Schnittke that’s going to keep me returning to this one

…Lionel Tertis's… transcription of Elgar's Cello Concerto in 1929. …been overhauled by Carpenter… Carpenter gives a commandingly articulate display, and the Philharmonia are on immaculately scrubbed form under Christoph Eschenbach's thoughtful lead. ...the powerful Schnittke Concerto... is an excitingly intrepid and deeply sincere creation, as provocative in its wild extremes of mood as it is intriguing in its fruitful juxtaposition of old and new. ...Carpenter plays with superlative assurance and magnetic conviction... an impressive and bold debut.

There's a huge amount to admire in his playing - the feather-light agility, the sumptuous tone, the generous phrasing