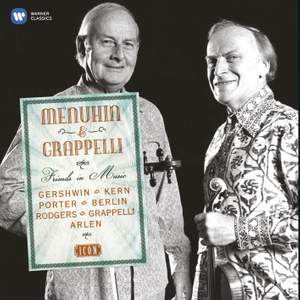 Kern: Pick Yourself Up

McHugh: I can't believe that you're in love with me

Rodgers, R: The Lady is a Tramp

Just one of those things

Porter, C: Looking at You

Kern: Why do I love you? (from Showboat)

Arlen: Between the Devil and the Deep Blue Sea

Rodgers, R: I Didn't Know What Time It Was

Harris, Max: Air on a Shoestring

Loesser: Once in love with Amy

Raksin: Laura (Based on the Song from the 1944 Otto Preminger's Movie)

Gershwin: He Loves And She Loves

Gershwin: They all laughed

Berlin, I: Puttin' on the Ritz

Berlin, I: The Piccolino

Loesser: Spring Will Be A Little Late This Year

April in Paris (from "Walk a Little Faster")

Autumn in New York (from "Thumbs Up!")

McHugh: On the sunny side of the street

Styne: The things we did last summer

Heat Wave (from "As Thousands Cheer")

Warren, H: September In The Rain

This 4 CD set containing all the recordings that the two legendary violinists Yehudi Menuhin and Stéphane Grappelli made for EMI is a further release in the EMI Classics ICON series.

The 4 CDs contain 86 songs, many by the great American songwriters George Gershwin, Jerome Kern, Irving Berlin and Cole Porter, as well as jazz standards like ‘Sweet Georgia Brown’, ‘Lullaby of Birdland’ and ‘Crazy Rhythm’. There are also 13 items composed by Grappelli himself, several of which were written specially for Menuhin.

The song ‘I didn’t know what time it was’ by Richard Rodgers on CD 2, recorded in Holland in October 1977, is being released here for the first time.

Arrangements are mostly by Max Harris, but those from the LP called Top Hat are by Nelson Riddle.