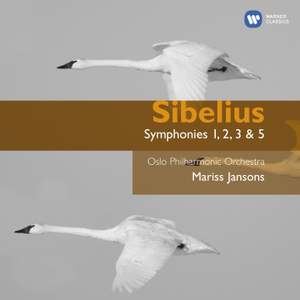 Jean Sibelius was born in 1865 as Julius Christian but adopted the French equivalent and is now always known as such. He soon established himself as Finland’s greatest composer and the most powerful symphonist to have come from Scandinavia and the countries surrounding the Baltic Sea. The first work to be composed in this collection recorded by Mariss Jansons and the Oslo Philharmonic Orchestra is arguably his most famous: Finlandia, written in 1899, which shows his strong belief in national self-determination for his homeland and against Russian rule. Works flowed quickly as by 1902 he had already completed his Second Symphony (both this and his First are in this set). His Valse Triste became very popular and throughout the world and tended temporarily to mask his other achievements, The Third Symphony tended to be overlooked as it was less romantic, more classical in form and was also distinct from the more brooding later symphonies; now it is becoming more performed and appreciated as part of the great canon.

Of the later Symphonies the Fifth is certainly the most popular, the dark gloom of the Fourth (no doubt due to the suspected throat cancer) had been replaced by brightness with melodies that truly sing. The gradual accelerando in the third movement is breathtaking in its excitement ending in a titanic coda where themes from the first and third movements are recalled, the final bars of loud staccato chords are both spell-binding in their originality and brilliant in their effect.

The last work from the set to be composed, Andante Festivo, was written in 1922 for string quartet just before the Sixth Symphony, he later expanded it for string orchestra.