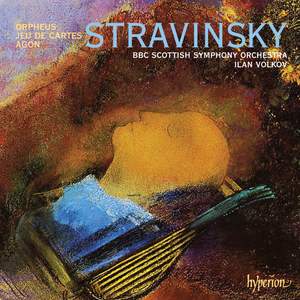 I. Introduction – Pas d'action – Entry and Dance of the Joker – Waltz-Coda

III. Introduction – Waltz – Battle of the Spades and Hearts – Final Dance and Coda

I. Orpheus weeps for Eurydice – Air de danse – Dance of the Angel of Death – Interlude

Stravinsky’s ballet music contains some of the composer’s most dazzling inspirations, and his work with Diaghilev’s Ballets Russes brought him to international attention before the first world war. But it was through his collaborations with Diaghilev’s protégé George Balanchine that Stravinsky evolved the individual ‘neoclassical’ style of his own that is arguably his greatest contribution to the musical language of the twentieth century.

Contemporary audiences were thrilled by the innovative nature of these works. Walter Terry wrote in the Herald Tribune at the premiere of Agon that it was ‘quite possibly the most brilliant ballet creation of our day … true, Agon is not warm, not overtly human, but its very coolness is refreshing and it generates excitement because it totally ignores human foibles, dramatic situation, and concentrates wholly on the miracle of the dancing body’.

Five of Stravinsky’s ballets have been recorded on two discs (the second to be released in January) by the BBC Scottish Symphony Orchestra under maestro Ilan Volkov. Volkov’s mastery of a range of Russian music is well-represented on Hyperion and has been greatly acclaimed on the concert platform.

…performances that project vibrant rhythmic urgency alongside a wonderful attention to internal detail and a subtle control of instrumental colour.

…virile, cogent performances… The statuesque quality of these ballets is ever-present, but these performances also bring them vividly to life in the mind's eye.

This is a fine new Stravinsky disc from the excellent partnership of Ilan Volkov and the BBC SSO … It’s an account that is similar in many ways to Stravinsky’s own Sony Classical recording, but obviously in better sound. Volkov and his players seem to perform the work with even greater confidence and joie de vivre … The notes are by
Stephen Walsh and are a model of clarity and conciseness, allied to deep understanding of the music. With such purposeful, sensitive conducting and such assured playing, this can be very warmly recommended

Both works [Jeu de cartes and Agon] suit Volkov's sinewy, precise style down to the ground, and are quite thrillingly played.