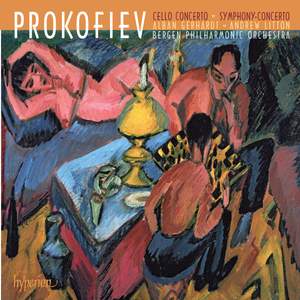 Whatever conclusions one draws from a direct comparison between the two works, there is little doubt that Alban Gerhardt is equally committed to both. …he performs with consummate authority,... — BBC Music Magazine, October 2009, More…

The two works recorded here have an interestingly close musical relationship that is belied by their radically different sound-worlds. Prokofiev’s first work for cello and orchestra was abandoned by the composer after an unsuccesful premiere, and the full score remained unpublished for years. However, a rising star barely in his twenties, Mstislav Rostropovich, found a copy with piano accompaniment and impressed the composer with his performance in December 1947. As Rostropovich remembered from their backstage encounter: ‘Prokofiev told me that after listening carefully to the Concerto he had decided to rewrite it. I reminded him of this each time I met him after that, but without success.’ What followed, in fact, was a completely new work—the Sonata for cello and piano Op 119—and the premiere of that, with Rostropovich eloquently partnered by Sviatoslav Richter (a recording survives), finally persuaded the now-ailing composer to the dramatic revision of the original Concerto. The resulting Symphony-Concerto is now acknowledged as one of the composer’s late masterpieces.

The young German virtuoso Alban Gerhardt was the soloist in a performance at the BBC Proms in 2008 that convinced a loudly appreciative audience of the merits of this work.

It has been recorded here with the first verson, Cello Concerto No 1, a work of undeniable importance to scholars and music-lovers alike. Andrew Litton conducts the Bergen Symphony Orchestra in their second disc for Hyperion.

Whatever conclusions one draws from a direct comparison between the two works, there is little doubt that Alban Gerhardt is equally committed to both. …he performs with consummate authority, pinpointing the vein of anxiety and uncertainty that lies beneath the surface of the Concerto... Andrew Litton and the Bergen Philharmonic offer incisive support... In the opening Andante of the Symphony-Concerto, Gerhardt and Litton establish an urgent and intense musical dialogue... Likewise, in the ensuring Allegro giusto both artists resists the temptation to slow down unduly from the glorious warm-hearted melody and deliver the macabre scherzo material with razor-sharp precision and biting wit.

As with the Fourth Symphony, Prokofiev conceived a major work under one set of cultural assumptions and revised it under another. …experiencing both versions side by side is a revelation - even more disturbing, in many ways, yet also endlessly thought-provoking - as it shows one of the most brilliantly gifted composers in history beset by irreconcilable conflicts between instinct and culture. ...Alban Gerhardt's playing, appropriately spotlit, is top-drawer stuff.

Matching menace with intense lyricism, these performances of two closely related works are compelling. Alban Gerhardt...can convey the lyrical lines mellifluously and also whet his cutting edge when the composer is at his most acerbic.