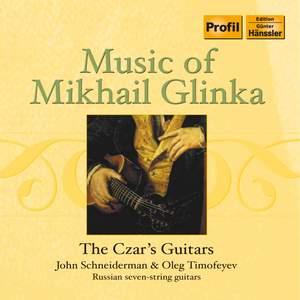 Why Are You Crying, Pretty Maiden? (Arr. for 7-String Guitar Duo)

This new release focuses on Glinka’s guitar music. When listening to this music it is difficult not to notice the Spanish influence, despite his Russian roots.

John Schneiderman and Oleg Timofeyev perform the works on a Russian seven string guitar which differs significantly from the Spanish guitar in construction, tuning, and technique and became popular in Russia in the late eighteenth century.