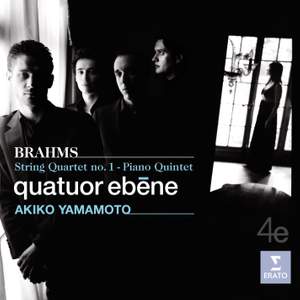 The C minor Quartet requires playing of the utmost passion if its complex textures are not to sound clogged, and this is what it receives here, though the delicacy and affection the players bring... — BBC Music Magazine, October 2009, 4 out of 5 stars More…

For their second Virgin Classics release the members of the Quatuor Ebène turn from the native French repertoire of their first release (Debussy, Ravel, Fauré) to music firmly in the Austro-German tradition, Brahms’ first string quartet and first piano quartet. Joining them for the quintet is the Japanese pianist Akiko Yamamoto; when the five musicians played the piece together in London in 2006, the Independent newspaper had the following to say: “This talented group wound up their concert with a brilliant performance of Brahms' Piano Quintet in F minor, with the piano acting as a firm anchor, while the strings sang their hearts out. Come back soon.”

The Ebène’s debut on Virgin Classics, the programme of French quartets released in September, has been receiving high praise: “Three French masterpieces (Debussy, Fauré, Ravel) played by young musicians with a rare degree of expressive subtlety, blended sonorities and electrifying joy. The late Fauré quartet achieves a fine balance between sounding suave and pulsing with life. Debussy quivers with febrile emotions, while the Ravel soars to heaven with refinement and poise,” said The Times, awarding the recording five stars. Also in the UK the Independent described the quartet as: “a Gallic equivalent of the Kronos Quartet, a widely acclaimed, award-winning group of young players whose dynamism and open-minded versatility is helping transform French classical music ... This set encompassing the principal string quartets of early-20th-century French music demonstrates something of the breadth and intensity of their abilities, not least in the different emphases they place on the passages, disruptively blending bowed and pizzicato notes which characterise the second movements of Debussy's String Quartet in G Minor and Ravel's String Quartet in F Major. Ravel modelled his piece as a homage to the earlier composition, and it's in the striking dynamic range which, despite its restricted pace, the Quatuor Ebène bring to the très lent third movement that best demonstrates their elegant command of the material. In Fauré's String Quartet in E Minor, they brilliantly negotiate the contrast between the melancholy cast of the first two movements and the more contented, even animated tone of the final movement, by allowing the lingering impressions of the second movement's see-sawing undulations to haunt the rest of the piece. “

“The quartet plays on a sensational technical level with a commitment that assures expressivity for every note, keeping the overall sound lush and colourful while also providing a well-rounded harmonic subtlety. The very first bars of the Debussy quartet gave evidence of the application, fascinating in its clarity, of a pastel artist’s technique, illuminating the polyphonic connections ... [and] squaring, so to speak, the quartet circle, a feat which this ensemble, though still young, carries off in masterly fashion. Moreover, the Quatuor Ebène ensures that scrupulously conceived musical structures are also sensuous in quality, and the musicians are sensitive to the play of tensions in directional chordal shadings – that beauty in dissonance, so to speak, which can so captivate the listener.” (Die Presse)

“In the space of just a few years [the Quatuor Ebène] has made its way to become one of the world’s top quartets. Beyond youthful French charm, the quartet is notable for its distinctive musical approach and technical supremacy. From its first bars, Claude Debussy’s G minor quartet fascinated with is variety of colours, delicate nuances and the specific sensibility of sound. For all the loving attention to detail, there was a sense of scale and passion. Vibrato was used sparingly, but in absolutely the right way. It is unusual for a quartet to be cheered after the first work in its programme, but that was the case on this occasion.

Naturally the Quatuor Ebène has a special connection with the spirit and tonal precision of the French repertoire, but its interpretations in other idioms are also on the highest level.” (Salzburger Nachrichten)

The C minor Quartet requires playing of the utmost passion if its complex textures are not to sound clogged, and this is what it receives here, though the delicacy and affection the players bring to the two middle movements are also admirable qualities too seldom heard. Akiko Yamamoto proves to be an ideal partner in the Piano Quintet, which achieves an extraordinary sense of drive and emotional abandon in the Finale.