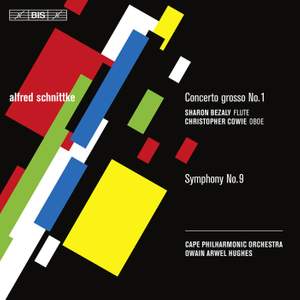 Schnittke - Concerto grosso No. 1 & Symphony No. 9

This disc concludes the Schnittke Symphony cycle available on BIS. His final symphony, Symphony No. 9, was written at the end of his life after he had suffered a serious stroke. The autograph score was so difficult to decipher that it had to be reconstructed after the composer’s death – a painstaking process which was crowned by a first performance in 2007.

The disc also includes a world première recording of Schnittke’s Concerto grosso No.1 with solo parts for flute and oboe. The soloists include flautist Sharon Bezaly and oboist Christopher Cowie, who makes his first appearance on BIS.