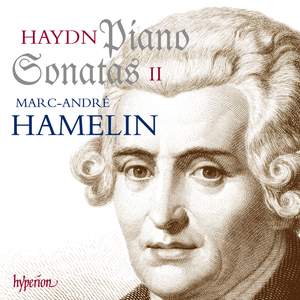 …a luminous evenness of touch and a wonderful lightness in his decorations and runs. …his account of the Adagio of the E flat, HobXVI:49, has a tenderness of its own. And while his account... — BBC Music Magazine, September 2009, 4 out of 5 stars More…

Marc-André Hamelin’s first set of Haydn Piano Sonatas was Hyperion’s best-selling release of 2007, and had the critics jostling to acclaim his performances in the highest terms, in particular his expression of the ‘physical exhilaration of Haydn’s playful inspiration in a way unmatched by any pianist past or present’. His second volume, released in a year where new Haydn recordings are prominent, should surely match the critical and commercial success of the first.

Some of Haydn’s most alluring and appealing keyboard works are recorded here. The surprising (to some) emotional range of the composer is fully evident in the extraordinarily sensitive and intimate Sonata in E flat major No 49, written for Maria Anna von Genzinger, and the profoundly felt Andante con variazioni in F minor, the composition of which coincided with her death.

…a luminous evenness of touch and a wonderful lightness in his decorations and runs. …his account of the Adagio of the E flat, HobXVI:49, has a tenderness of its own. And while his account of the unsettling F minor Variations knocks a startling three minutes off the timing of Gary Cooper's account reviewed here in the July issue, it proves quite as intense.

…Hamelin exhibits a coruscating wit and brilliance known to few pianists. When have you head dotted rhythms more sprucely articulated than in No 35's finale, or wondered how terms such as vivace can take on a whole new meaning given such rapier reflexes and musical sheen?

One of the outstanding releases of the Haydn celebratory year

Hamelin is especially compelling in the great C major (No 48) and E flat major (No 49) sonatas, works that rank with the finest creations of the Viennese Classical period. An unmissable bargain at two-discs-for-the-price of one.

In the sonatas proper...he is a model of correctness, with enough wit, exuberance and the most exquisite lightness of touches to keep the music buoyant.