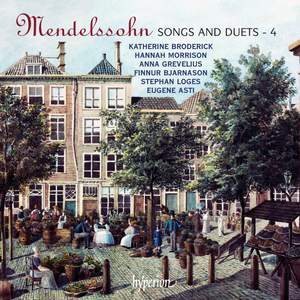 Stephan Loges satisfies most consistently with his understanding, beauty of tone and care for legato. Asti is the admirable pianist throughout and in two of the items is responsible for the completion... — Gramophone Magazine More…

Mendelssohn seems to have finally hit the big league in this bicentenary year of his birth. Critical reappraisals of his music have confirmed this somewhat elusive composer as an important Romantic figure, and probably the greatest child prodigy of all time. Hyperion’s contribution to the composer’s rehabilitation includes the acclaimed series of Songs and Duets, now reaching Volume 4.

It is remarkable to realize that compositions by a major composer in the Western canon could go unpublished and unheard for more than 150 years, but that was the sad situation with Mendelssohn—until recently. The pianist Eugene Asti has gathered together 46 previously unknown songs from various stages of this composer’s sadly truncated life. Through much of the previous century, his songs were often judged against the example of Schubert, Schumann, and Brahms and found wanting, but Mendelssohn’s aesthetic of song was very different from those of his contemporaries. What the newly published works reveal is a willingness to experiment with novel song forms and highly expressive harmonies, some of which go beyond the graceful and vocally grateful melodies, limpid textures, and strophic forms for which he is best known.

For this disc, Eugene Asti has gathered together a dazzling selection of singers, including some of the most exciting young artists working today. Katherine Broderick, the winner of the coveted 2007 Kathleen Ferrier Prize, has a uniquely beautiful voice, its bloom and agility belying its considerable power.

Stephan Loges satisfies most consistently with his understanding, beauty of tone and care for legato. Asti is the admirable pianist throughout and in two of the items is responsible for the completion of songs left unfinished

What a concentration of talent in one place! … The enterprise is crowned by a barnstorming account from Katherine Broderick of 'Hexenlied'

Hyperion’s series of Mendelssohn’s neglected vocal pieces continues to spread enchantment, thanks in part to young British talent...Some of the repertoire is modest, but duds are rare, genius is frequent and Mendelssohn’s charm almost constant.