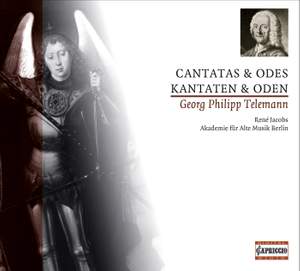 This Telemann production was released in 1989. Nowadays you can only imagine Jacobs as the director of the ensemble, but in this recording, René Jacobs is the countertenor, being accompanied by the members of the Akademie für Alte Musik in a chamber music arrangement – without director.

The cooperation between René Jacobs and the Berlin-based orchestra, which led to a number of award-winning releases, began with this Telemann recording. Since then, both have been awarded with the Telemann prize of the city of Magdeburg - the Akademie für Alte Musik in 2006; René Jacobs in 2008.

This collection of cantatas sung by René Jacobs includes a printed libretto.