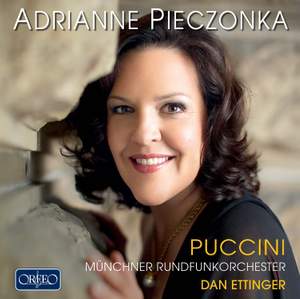 Canadian soprano Adrianne Pieczonka gives an impressive display of her versatility in this formidably wide-ranging collection of Puccini arias. …in every item she conveys a dramatic portrait... — Gramophone Magazine, December 2009 More…

Adrianne Pieczonka's diary for the next few months makes it clear that this soprano, long celebrated for her Wagner and Strauss roles across the world, is now also in international demand for the Italian repertoire. She is singing Tosca in San Francisco, Desdemona in Munich,Amelia, Simon Boccanegra, at the Met alongside Plácido Domingo and Requiem at Carnegie Hall. None of which should be a surprise as she is one of the finest exponents of bel canto singing today. Pieczonka's foray into Puccini roles takes us from his debut Le Villi to the late Turandot. She can offer with ease the dramatic power necessary for the title roles of Madama Butterfly or Tosca, yet she still remains true to the lyrical ideal, whether in Lauretta's 'O mio babbino caro' or the soulful phrases of Mimì or Liù that are so beloved of the public.Tosca's prayer has become an acknowledged highpoint in her repertoire, though the same should now be said of the whole rôle itself. She may have famously borrowed the jewellery of Maria Callas to sing Tosca, but she needs no borrowed plumes, for as we hear on this CD,Adrianne Pieczonka has emerged as a Puccini singer of the first rank.

"Domingo was lucky to have a wonderful Sieglinde in the lovely Canadian soprano Adrianne Pieczonka, who brought a gleaming voice, affecting vulnerability and exciting sensuality to her performance." New York Times

"The company's "Tosca" has been around… But Tosca is new: Adrianne Pieczonka sang the role for the first time Saturday. The Canadian soprano will surely be singing it for a long time. She was radiant." LA Times

Canadian soprano Adrianne Pieczonka gives an impressive display of her versatility in this formidably wide-ranging collection of Puccini arias. …in every item she conveys a dramatic portrait of each heroine. …in Butterfly's two big numbers…she demonstrates her full calibre, with fine detail and subtle shading in "Un bel dì" and offering a formidable climax in the suicide aria. Here as elsewhere she sings with splendid projection with firmly held top notes, fine and steady.