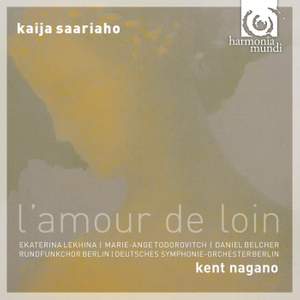 Kent Nagano's Berlin forces convey every nuance of this shimmering score, and the surround-sound recording is first-rate, making this a set that approaches ideal. — BBC Music Magazine, October 2009, 5 out of 5 stars More…

To coincide with a new production of Kaija Saariaho's opera, L'amour de loin, at English National Opera, directed by Daniele Finzi Pasca and directed by Ed Gardner, harmonia mundi are proud to release Kent Nagano's new recording. Theatrical Magic director Daniele Finzi Pasca is part of the extraordinary new circus revolution which has transformed the art form in recent years. He created Corteo for Cirque du Soleil. For Cirque Éloize his Rain was a sell-out success on Broadway. He also created the Closing Ceremony for the Turin Winter Olympics, 2006.

Composed to a libretto by Amin Maalouf and premièred at Salzburg in 2000 in a production by Peter Sellars, L'Amour de loin was described by the New York Times as the Best New Work of the Year in 2000. Kaija Saariaho's first opera follows a 12th-century troubadour's search for love across a constantly changing theatrical landscape.This reinterpretation of the medieval narrative of the life of Jaufré Rudel tackles a number of highly topical themes: love from afar, the virtuality of ideal love and relations between East and West.

Kent Nagano's Berlin forces convey every nuance of this shimmering score, and the surround-sound recording is first-rate, making this a set that approaches ideal.

The success of such a score, then, rests entirely on the sense of atmospheric tension the orchestra is able to create. Happily, Kent Nagano's interpretation here makes the most of every nuance...All in all, this is a finely balanced and atmospheric performance, ensuring that the opera works almost as well on disc as it does on stage. No mean feat.

Saariaho has declared herself uninterested in the concept of courtly love and prefers to see her work as a more modern, wider meditation on love. Her delicate music, superbly realised here by the Deutsches Symphonie-Orchester Berlin under Nagano, reflects this in the same way that Maalouf is able, like Edward Said, to look beyond the clichés of Orientalism. The fine cast features American baritone Daniel Belcher as a lithe, musical Jaufré and Russian soprano Ekaterina Lekhina as a delicate and languid Clémence.

Kaija Saariaho's first opera will surely become one of the emblematic works of the decade, its theme of cross-cultural relationships holding up a mirror to our own atomised, divided times.

Authoritatively conducted by Kent Nagano, sumptuously played by the Deutsches Symphonie-Orchester and rapturously sung by the three excellent soloists, the performance is one of irresistible shimmering beauty.