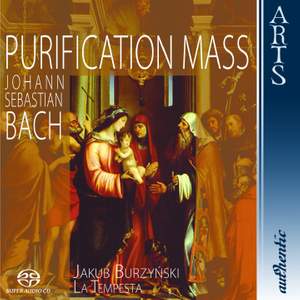 J S Bach wrote several cantatas for alto solo, however there is one that is rarely performed or recorded: the alto version of the famous bass cantata Ich habe genug BWV 82. Scored for voice, oboe and strings, the cantata consists of three arias which are completely different in character and expression, with two short recitatives between them.

It was composed for the feast of Purification of Mary (2 February), and its text which incorporates the words of old Simeon to Mary about the coming of the Messiah, concentrates on the subject of welcoming death. Since the feast of Purification was one of the most solemn occasions in the Lutheran liturgical calendar, there is a strong argument in favour of completing the program with figural Latin mass parts, and this recording includes sections from other works in an attempt to re-create music for the full event.

The performers are the period instrument group La Tempesta under the artistic direction of Jakub Burzynski. Burzynski is also an excellent countertenor, and he takes one of the alto parts in this production. Other soloists include the soprano Julita Miroslawska, the tenor Mariusz Cyciura, and bass-baritone Artur Janda.