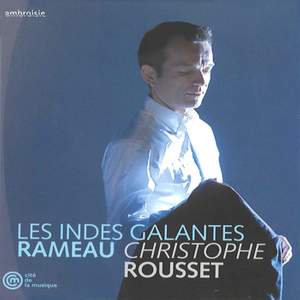 Rousset's recital is generously endowed with graceful gestures, elegant phrasing and well-defined ornaments. …he… conveys the sheer charm of the music with impeccable style and flawless technique. — BBC Music Magazine, November 2009, 4 out of 5 stars More…

Christophe Rousset plays Rameau’s instrumental transcription of Les Indes Galantes on the stunning 18th century Jean-Henry Hemsch harpsichord. Public disapproval to the premiere of the opéra-ballet led to Rameau not only omitting the recitatives and its controversial passages, but to transcribing the whole work for instruments. He re-grouped the remaining pieces according to their keys into what he called ‘quatre grands concerts’ or concert suites. In doing so, he hoped that the music itself would popularise the opera and would in turn influence the public’s attitude to the work.

Rousset is one of the finest and most exciting harpsichordists today, and as a conductor is a leader in the late 20th century revival of French Baroque music. He has won critical accolades for his extraordinary command of the harpsichord repertory. His recordings of the complete harpsichord works of François Couperin, Rameau, D’Anglebert and Forqueray, and his regular incursions into the music of J S Bach, are regarded as benchmarks. With his ensemble, Les Talens Lyrique, Rousset’s most notable successes on disc include Pergolesi’s Stabat Mater, Mozart’s Mitridate, the overtures of Rameau, Lully’s Roland, and Salieri’s La grotta di Trofonio.

Rousset's recital is generously endowed with graceful gestures, elegant phrasing and well-defined ornaments. …he… conveys the sheer charm of the music with impeccable style and flawless technique.

Equally feted as a harpsichordist and conductor of French baroque repertoire, Rousset's account of Rameau's transcription of music from Les Indes Galantes displays all the virtues of his conducting as well as dazzling keyboard skills.

Want a harpsichord in your living room? The sound recording on Rousset’s recital is so vivid that you’ll feel the instrument’s physical presence. It’s a splendid specimen, with the clarity and subtlety necessary for Rameau’s transcriptions of airs and dances from his 1735 opera-ballet about love in exotic climes. Rousset’s a masterful player, brilliant one second, tender the next, and he paints the air with dazzling colours.

The Independent on Sunday 2nd August 2009

Rameau's keyboard transcription inevitably sounds thin and unidiomatic, though Rousset's rhythmic acuity and sensual phrasing are impressive. A movement-by-movement guide to the Grand Concerts is illuminating.