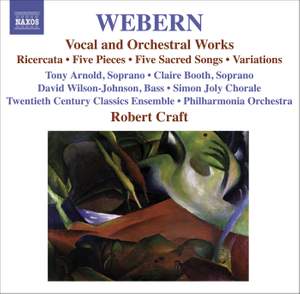 Craft's approach seems to have mellowed somewhat; he allows more space for the impacted lyricism of Webern's writing to make its mark, though still without quite the Viennese flavour that composers... — The Guardian, 10th July 2009 More…

No. 3. In Gottes Namen aufstehn

Webern: Das Augenlicht, ‘Through Our Open Eyes Light Flows into the Heart’, Op. 26

Robert Craft’s abiding love and understanding of Anton Webern’s music have made him an internationally renowned champion of this elusive composer’s oeuvre.

Whether transforming the ‘Ricercata’ from J.S. Bach’s A Musical Offering into a kaleidoscope of orchestral sounds, creating vivid new colours through ever-changing vocal and instrumental groupings, revelling in multi-layered polyphony or cultivating the purest simplicity, Webern reveals new musical worlds which remain as fresh and fascinating today as when they were written.

“[Robert Craft’s] new home, Naxos, adds the lure of bargain prices to recordings that would be important no matter the cost…they provide rich overviews of the evolving styles of Webern and Schoenberg. Many of the performances are by the Twentieth Century Classics Ensemble, a group of veteran New York new-music players who could just as well call themselves the Robert Craft All-Stars…their interpretations reflect Mr. Craft's half century of experience with this repertory.” The New York Times

Craft's approach seems to have mellowed somewhat; he allows more space for the impacted lyricism of Webern's writing to make its mark, though still without quite the Viennese flavour that composers such as Karajan brought to it. It's an ideal introduction to one of the 20th century's greatest composers, and a second volume including Webern's other orchestral and choral works would be more than welcome.

Eleven vocal and orchestral works by the Second Viennese School’s miniaturist magician, performed with great clarity and ardour in a thrilling, warm recording. The 20th-century faithful Robert Craft knows every note inside out, but there’s nothing of the laboratory in the performances drawn from the Philharmonia Orchestra (the op 10 pieces are outstanding), the 20th Century Classics Ensemble (so lyrical in the Bach transcription), or the vocalists. Essential listening.