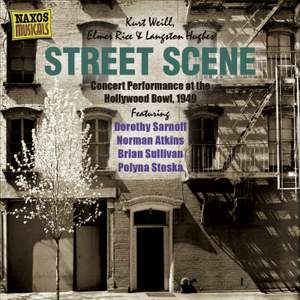 Act I: I got a marble and a star (Henry)

Act I: Gossip Trio: Get A Load of That (Greta, Emma, Olga, Ensemble)

Act I: When A Woman Has A Baby (David, Ensemble)

Act I: Scene: Somehow I Never Could Believe (Anna)

Act I: Let Things Be Like They Always Was (Frank)

Act I: What Good Would The Moon Be? (Rose)

Act I: Remember That I Care (Rose, Sam)

Act II Scene 1: The Woman Who Lived Up There (Ensemble)

Act II Scene 2: I Loved Her Too (Frank, Rose, Ensemble)

Street Scene is a Broadway musical or, more precisely, an ‘American opera"’ by Kurt Weill, based on the Pulitzer Prize-winning play of the same name by Rice. For his work on Street Scene, Weill received the first Tony Award for Best Original Score.

The play takes place on the doorstep of a tenement on the East Side of Manhattan on two brutally hot days in 1946. The story focuses on two plotlines: the romance between Rose Maurrant and her neighbour Sam Kaplan; and on the extramarital affair of Rose's mother, Anna, which is eventually discovered by Rose's irritable father, Frank. The show portrays the ordinary romances, squabbles and gossips of the neighbours, as the mounting tensions involving the Maurrant family eventually build into a tragedy of epic proportions.

Performers were specially assembled for this one concert and casting in some instances is uncertain but given according to best knowledge.