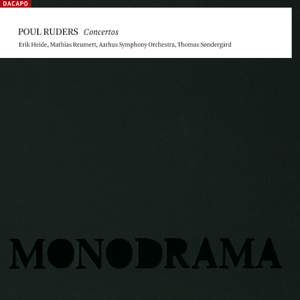 Theme and Variation I: Vivace maestoso

Poul Ruders is one of the biggest names in contemporary Scandinavian music. His orchestral works in particular have a brilliance and intensity that have made a great impression on audiences around the world.

Concerto in Pieces (1994-95) was played at the Last Night of the Proms in 1995 and is one of the most successful orchestral works of our time. It is based on a theme by Purcell and is a witty, explosively colourful successor to Britten’s Young Person’s Guide to the Orchestra.

In the sunny Violin Concerto no. 1 (1981) the present day meets both Vivaldi and Schubert, while the percussion concerto Monodrama (1988) is a strong example of the primal Nordic power that fuels all of Ruders’ works.

The Aarhus Symphony Orchestra, founded in 1935, is one of Denmark’s five regional orchestras with a repertoire that ranges wide, from Baroque music to the very latest composition music. Thomas Søndergård was described as “a sensation” when he made his conducting debut with the Royal Danish Opera in 2005 on Ruders’ opera Kafka’s Trial.