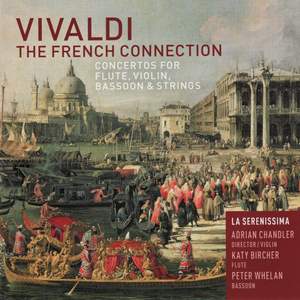 The performances… are typically neatly-pointed and vivacious. — BBC Music Magazine, October 2009, 4 out of 5 stars More…

After the extremely successful and acclaimed series ‘The Rise of the North Italian Violin Concerto’ Adrian Chandler and La Serenissima return to AVIE to explore another side of Vivaldi’s compositions : The French Connection.

“The voracity with which the French devoured Italian music during the late baroque period is well documented. Vivaldi was involved in both the dissemination of the French style in Italy and that of the Italian style in France. His works achieved fashionable status there in the late 1720s thanks to his concertos Le Quattro Stagioni which became a feature at the popular Concert Spirituel (between 1728 and 1763).” Adrian Chandler

The performances… are typically neatly-pointed and vivacious.

…the three solo instruments come and go in various combinations, always pleasing us and never outstaying their welcome. They are played with skill and taste… The orchestral sound, as always with La Serenissima, achieves bright attractiveness and vivacity without feeling the need to pursue the taut energy of some other groups. And that's just fine.

The Independent on Sunday 25th July 2009

In the flamboyant double-dots of the C-minor concerto, the melancholy groundbass of the G-minor concerto and the delicious closing Chaconne of the C-major, the playing is consistently zestful. Chandler, flautist Katy Bircher and bassoonist Peter Whelan play a further series of exacting concertos with the effortless musicality of birds.