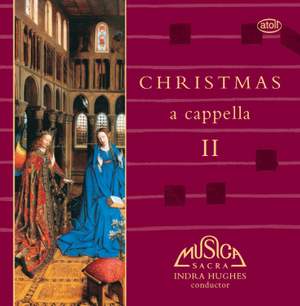 all concerned cope very well with the wide variety of material on offer, from the traditional via the renaissance and baroque to the comparatively modern. — MusicWeb International, 4th December 2014

Lo, How a Rose E'er Blooming

While Shepherds Watched Their Flocks

As with Gladness Men of Old

The Christ-Child Lay on Mary's Lap

It Came Upon the Midnight Clear

O God, Who by the Leading of a Star

Away in a Manger

This beautiful album from one of NZ's leading choirs is a sequel to the very successful “Christmas a cappella”, No 1 in the NZ classical charts in 2001.

This second programme of unaccompanied Christmas choral music is performed by one of New Zealand’s most successful choirs and includes a wide variety o pieces: some well known Chirstmas favourites; some familiar tunes in new arrangments; and some pieces that have not been recorded before. The music ranges from the sixteenth century to the present day, with composers from America, Germany, Austria, England, Ireland, France, Italy and New Zealand.

Musica Sacra, established in 1998, is a chamber choir of around 35 voices with an enviable reputation for choral singing of magnificence and extraordinary finesse. Founded and directed by Dr Indra Hughes, "New Zealand music's Richie McCaw" (New Zealand Listener, December 2011) the choir is recognised as one of New Zealand's foremost cultural assets.

all concerned cope very well with the wide variety of material on offer, from the traditional via the renaissance and baroque to the comparatively modern.