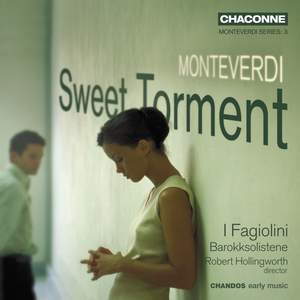 …the third in a series of Monteverdi madrigal anthologies…shows terrific musical discernment. The experience and flair of I Fagiolini is clearly demonstrated across these styles and textures.... — BBC Music Magazine, August 2009, 4 out of 5 stars More…

'Whether in impassioned monologues or ecstatic ensemble pieces, I Fagiolini’s superbly responsive singing gives this collection of some of Monteverdi’s most vividly expressive madrigals a wonderful air of emotional spontaneity.' (Telegraph ‘CDs of the year’ on Vol.1.)

'This is a disc to be relished as much for its sudden contrasts as for the ensemble’s unfailingly spirited, idiomatic performances… In terms of expressive range, I Fagiolini is without equal' (Independent on Sunday on Vol.2)

just two of the rapturous comments offered to the previous two volumes.

In this third survey of their Monteverdi madrigals, I Fagiolini once again demonstrate the astonishing range of the composer’s secular art, leading us from the works of his early Mantuan maturity to the Baroque glories of his Venetian years, before returning us to the seconda pratica in Il Ballo dell’ Ingrate.

By the time of Monteverdi’s Fifth and Sixth books, the madrigal, had acquired a new energy through the refreshed desire to move its listeners all the more strongly. In listening to a collection such as this, what most impresses and delights us is the sheer variety of Monteverdi’s expressive art. The two Petrarch settings from Book Six, for example, though relatively old-fashioned in their use of unaccompanied five-voice texture, show the most refined ear for the fluid emotional tenor of their texts. The two works from Book V make a pleasing parallel with these two Petrarch settings: T’amo, mia vita also makes play of the quasi-dramatic alternation between solo soprano and lower voices, and Questi vaghi concenti likewise pits the carefree joy of the natural world against the plaints of the lovesick poet. In the Eighth Book, the process of distinguishing and separating each successive affetto reaches a climax. Il Ballo delle Ingrate, published in the Eighth Book but written some thirty years previously, brings us full circle back to the Mantuan years and the birth of opera. Like Orfeo, Il Ballo delle Ingrate breathes an air of triumphant discovery, of fresh powers, of new worlds of expression opening up for the composer – worlds whose exploration would be his unique and ever-fascinating achievement.

This series has offered I Fagiolini the opportunity to offer the listener contemporary passion and scholarship, and has achieved their ambition to challenge the accepted pre-eminence of the Italian groups. This is Monteverdi for both the 16th and 21st century.

…the third in a series of Monteverdi madrigal anthologies…shows terrific musical discernment. The experience and flair of I Fagiolini is clearly demonstrated across these styles and textures. …the Baroque instrumentalists under violinist Bjarte Eike add much to the Ballo della Ingrate - the high plucked strings accompanying Amore are magical, and Plutone's magnificent bass singing is neatly supported.

…most successful… is the Ballo delle ingrate, one of the most coherent accounts of it I can remember, with a sharply delineated Pluto. The variety of continuo instruments is highly effective, and the work's dramatic line holds until the final, valedictory exhortation.

The Independent on Sunday 5th July 2009

The range of effects is startling: from the dazed idée fixe of "T'amo, mia vita!" (1605) to the bouyant ground bass of "Zefiro torna" (1632), here brilliantly animated by chitarrone, harp and harpsichord. Most exciting, however, is the group's reading of "Ballo delle Ingrate" and Barokksolistene's sullen dance for the damned.