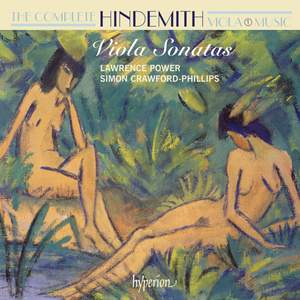 …the 1939 Sonata that opens this disc… receives a decisive performance from Lawrence Power and Simon Crawford-Phillips. The Sonata Op. 11 No. 4, dating from 1919, is written in Hindemith's early,... — BBC Music Magazine, July 2009, More…

Lawrence Power, Britain’s acknowledged greatest living performer on the viola, turns his attention to an incalculably important body of work for the instrument: a complete survey of Hindemith’s music for viola. Hindemith himself was an internationally renowned violist and gave the premiere of Walton’s Viola Concerto, writing more solo repertoire for the viola than for any other instrument. Hindemith is a genuinely undervalued composer, with a popular impression of his music as uncompromisingly gritty which will be proved by this series to be entirely undeserved.

The Viola Sonata in F major Op 11 No 4 is a graceful and charming work that may surprise those who are only aware of Hindemith’s place in the European avant-garde. The stunningly melodic opening of the first movement and the lullaby-like tune which features in the Finale comprise some of the most romantic music the composer ever wrote. The Sonata Op 25 No 4, written only three years later, shows the development of Hindemith’s style in the intervening period: an altogether tauter construction, in the leaner, rhythmically highly directed idiom that had rapidly evolved in those years. The piano plays an unusually prominent role. The Meditation for viola and piano of 1938 is a transcription of a peaceful movement from his ballet of the same year about St Francis of Assisi, Nobilissima visiona, depicting the saint at prayer: it will be familiar to concert-goers as the opening portion of the orchestral suite that Hindemith also fashioned from the ballet. The music is a kind of distillation of his mature idiom, gravely flowing and serene.

…the 1939 Sonata that opens this disc… receives a decisive performance from Lawrence Power and Simon Crawford-Phillips. The Sonata Op. 11 No. 4, dating from 1919, is written in Hindemith's early, Brahms-with-chromatic-twists style; it gives Power a chance to show off the gorgeously smooth tone of his 400-year-old instrument. ...the Sonata Op. 25 No. 4 features an uncharacteristically Bartókian finale and a big piano part that Crawford-Phillips... seizes gratefully. Power's acute sense of phrasing makes for an eloquent and elegiac Meditation...

Paul Hindemith isn't exactly the first composer you think of when the term 'hit tune' is mentioned but the opening Fantasie of his F major Viola Sonata (Op 11 No 4) of 1919 comes pretty close to providing one, especially as 'sung' by viola-player Lawrence Power. 'Might almost be by Brahms…' says Malcolm MacDonald in a typically persuasive and informative bookletnote, which is surely true. The finale is a fairly assertive mood-breaker, pianist Simon Crawford- Phillips marking a dramatic contrast in tempo and colour (now this really does sound like 'updated' Brahms). The grittier Sonata of 1939 also includes a Phantasie, placed third in the structure rather than first. This is the Hindemith of the Mathis der Maler Symphony, purposeful music, square-jawed, angular, confident and assertive, though with more fanciful elements too – especially in the finale, which at times is both playful and delicate.
Macdonald notes the possible influence of Bartók on the Sonata Op 25 No 4 (1922), which seems a justified claim. This is another strong piece, more percussive than the 1939 Sonata, with a desolate but heart-rending slow movement that is savagely interrupted by the finale's aggressive arrival. The CD (Vol 1 of 'The Complete Hindemith Viola Music' is what it's called), which is superbly recorded, is completed with a sensitive performance of the serene Meditation from Nobilissima visione in Hindemith's own arrangement for viola and piano. As to the per- formances, not since the days of William Primrose has Hindemith's viola music been played with such warmth and conviction. A 100 per cent success story.

…not since the days of William Primrose have I heard Hindermith's viola music played with such warmth and conviction and… the pianist is first-rate. A 100 per cent success story.

All the performances are superb, with Laurence Power lavishing all the richness of his velvety tone and generous phrasing on some of the most striking melodic ideas that Hindemith ever produced.